Rahul Gandhi's visit to Kerala's Wayanad is a bit of rare celebration for the Congress party chief after an overall poor performance of the party in other states.

Congress president Rahul Gandhi has begun his three-day visit to his constituency of Wayanad in Kerala. This is his first trip to the hill town since he won the national election from there and his party's disastrous performance in most parts of the country. Mr Gandhi lost the other seat he contested, Amethi in Uttar Pradesh. Rahul Gandhi could be seen making his way through the roads of Wayanad in an open truck that was covered with a canopy due to pre-monsoon showers.

The rain did not stop hundreds of workers to walk along though, holding banners that read "We are with you, Rahul" and "IYC(Indian Youth Congress) need you to lead us"

With the overall poor performance of the party in other states, Rahul Gandhi's visit to Kerala is a bit of rare celebration for the Congress party chief. Out of the 20 Lok Sabha seats in Kerala, the Congress won 19. 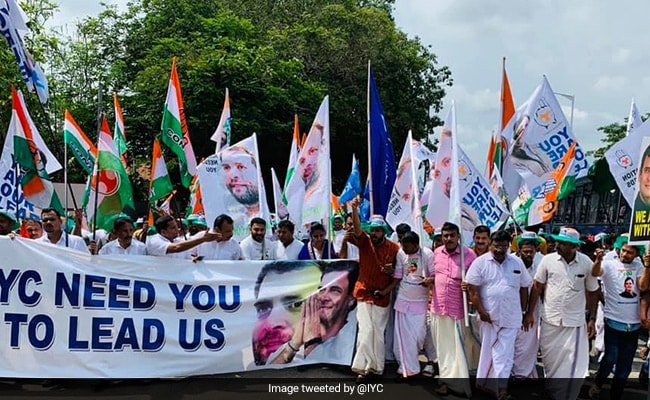 The visit is spread over three districts in northern Kerala, parts of which form the parliamentary constituency of Wayanad. Over the weekend, he will visit make several quick stops in Malappuram, followed by Wayanad and Kozhikode districts. He stopped at cafe in Malappuram on Friday for evening tea and snacks, and interacted with the locals.

Kerala: Congress President Rahul Gandhi stops for tea at a shop in Chokkad of Malappuram district. He is on a three-day visit to the state, beginning today. pic.twitter.com/YP1Qgei6rR

Soon after the results were declared last month, Rahul Gandhi had expressed his gratitude to the people of Wayanad for electing him.

Last Friday, in his first act as lawmaker from Wayanad, he wrote to the state Chief Minister asking for an inquiry into a farmer suicide. The Congress chief said the death was "not isolated" and that Wayanad had seen many farmer suicides over unpaid loans. He received a prompt response from Chief Minister Pinarayi Vijayan, who urged him to raise the subject in parliament.

Since his defeat, which sums up the Congress's collapse in the election, Rahul Gandhi has told his party that he will not continue as party president.

Rahul Gandhi contested from a second constituency for the first time in the seven-phase national election. He lost his traditional Amethi constituency in Uttar Pradesh to the BJP's Smriti Irani. But Mr Gandhi managed to win from Wayanad by a huge margin, of over 4.31 lakh votes, beating his nearest rival from the Left.

Prime Minister Narendra Modi too will be in Kerala on Saturday, his first visit in his second term as Prime Minister. PM Modi will offer prayers at the famous Sri Krishna temple in Guruvayur on Saturday and address a public gathering in Thrissur. He will pray at the Lord Venkateswara shrine in Andhra Pradesh's Tirupati on Sunday.