Rahul Gandhi said he and the Congress president briefly visited Nagarhole Tiger Reserve where they happened to come across the painful sight of the injured baby elephant, with its mother. 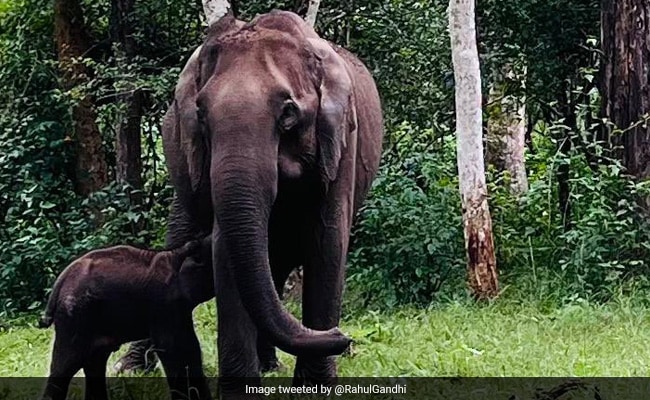 Rahul Gandhi earlier tweeted a picture of the baby elephant with the mother.

Anguished by the plight of an injured baby elephant in the Nagarhole Tiger Reserve near Mysuru, former Congress president Rahul Gandhi Wednesday urged Karnataka Chief Minister Basavaraj Bommai to help the animal, saying it is in need of urgent medical care.

Rahul and Sonia Gandhi had on Tuesday visited the reserve where he saw the baby elephant.

In his letter to Mr Bommai, Rahul Gandhi said he and the Congress president briefly visited Nagarhole Tiger Reserve where they happened to come across the painful sight of the injured baby elephant, with its mother. The little calf has a severely injured tail and trunk, and is fighting for its life, he said.

"I understand and appreciate that there is a view that nature must be allowed to take its own course. However, in the case of endangered and iconic species, exceptions are often made depending on the severity of the situation. The aforementioned calf is undoubtedly in need of urgent medical care," he said in his letter.

"Therefore, I wanted to cross political boundaries and appeal to your sense of compassion to intervene and save the little elephant.

"I am confident that it will survive if given proper treatment. I hope you will extend timely assistance to save the iconic little elephant," Rahul Gandhi told the chief minister.

The former Congress chief earlier tweeted a picture of the baby elephant with the mother.

"A mother's love. I felt so sad to see this beautiful elephant with her injured little baby fighting for its life," he said on Twitter.

"On the day of rest for Bharat Jodo Yatra Rahul Gandhi visited the Nagarhole Tiger Reserve and was anguished by what he saw. Here is his letter of concern on India's national heritage animal, just sent to CM of Karnataka," Ramesh said.