Rahul Gandhi's recent performance on Twitter, replete with one-liners and sarcastic attacks on the government, has received of a lot of attention. 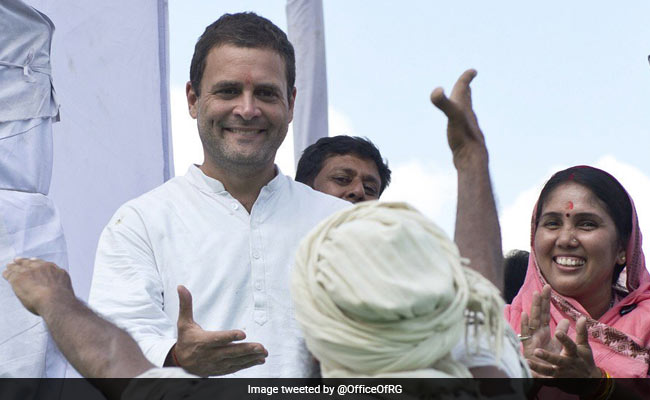 New Delhi: Pidi Gandhi gained rapid fame on Twitter on Sunday after Rahul Gandhi posted a video of his pet dog, crediting him with his recent rise in popularity on the social media site, a sarcastic comeback to detractors who have suggested that someone else has been tweeting for the Congress vice president.

"People (have) been asking who tweets for this guy... I'm coming clean..it's me..Pidi..I'm way smarter than him. Look what I can do with a tweet..oops..treat!," Mr Gandhi tweeted. On the accompanying video, Pidi performed a neat trick on command.

Twitter was instantly abuzz, with reactions both from fans and critics pouring in and 'Pidi Gandhi' and '#Pidi" were among the day's top Twitter trends. By Sunday night, Mr Gandhi's tweet had racked up over 20,000 likes and more than 8,000 retweets. At least eight parody Pidi handles had sprung up.

Among early comments was one by BJP leader Himanta Biswa Sarma, who said, "Sir @OfficeOfRG, who knows him better than me. Still remember you busy feeding biscuits to him while we wanted to discuss urgent Assam's issues."

Mr Sarma is a former Congressman from Assam who quit the party protesting against what he called the apathy of the Congress vice-president, alleging that Rahul Gandhi preferred to spend time with his pets when he tried to meet him in Delhi to talk about the party's problems in the state. He soon joined the BJP, and has since delivered a string of historic wins in the north east for the party.

Promoted
Listen to the latest songs, only on JioSaavn.com
Himanta Biswa Sarma drew instant attacks from Congress leaders. "We also know you better now," said lawmaker Sushmita Dev. Others were delighted with Mr Gandhi's tweet. So now you know! Who can match this talent?

So now you know! Who can match this talent? https://t.co/1jXiX7AZpJ

Pidi, you are rocking the show! https://t.co/OlK7PbekE0

When is Smriti Irani Ji holding a presser??? https://t.co/vnTg7x6NnA

The BJP took digs at Mr Gandhi. The party's IT chief Amit Malviya tweeted a poster and said, "Pidi lao, Congress bachao (Bring Pidi, save Congress). A morphed poster of Akshay Kumar's upcoming movie Padman, it shows Rahul Gandhi riding a bicycle with his hands in the air and Pidi steering the handles.

Rahul Gandhi has 4 million followers on Twitter, no match for Prime Minister Narendra Modi's 36 million. Many other politicians like Arvind Kejriwal and Sushma Swaraj too have more followers. But the Congress leader has recently turned very active on Twitter, delivering sharp jibes at the BJP, the government and PM Modi and senior ministers.

The BJP has accused Mr Gandhi of using bots or software-driven accounts that automate actions like retweets and likes, to inflate his following on the site, but the Congress has rejected that charge. On October 15, a Rahul Gandhi tweet that was addressed to PM Modi and mentioned US President Donald Trump, was retweeted over 30,000 times.