Rahul Gandhi's promotion, however, comes at a tumultuous time. The Gujarat election, where the final phase of voting was held this week, was the first time that Rahul Gandhi led the party's campaign from the front.

Rahul Gandhi was elevated as the Congress party's vice president in January 2013. (PTI)

New Delhi: Congress president-elect Rahul Gandhi will take over as party chief today, in place of his mother Sonia Gandhi, a generational shift at the top of India's oldest party that could have trickle-down effects too. Mr Gandhi, who has often been seen as a reluctant politician, was named the chief-to-be on Monday after no one else from his party challenged him in the internal election.

Mr Gandhi's promotion, however, comes at a tumultuous time. The Gujarat election, where the final phase of voting was held this week, was the first time that Rahul Gandhi led the party's campaign from the front. Though his party billed it as a sign of an overhauled public image, nearly all exit polls have predicted the Congress losing to the BJP by a large margin. The Congress is also widely expected to lose Himachal Pradesh. Results for both the state elections will be declared on Monday.

Mr Gandhi's elevation caps years of speculation about his new role. It also comes nearly two months after Sonia Gandhi told NDTV that a promotion for her son was due soon. But Rahul Gandhi, who spent much of the last several weeks in Gujarat, reportedly decided to put off his promotion because he did not want the party leaders to get distracted from the immediate challenge in the crucial state. 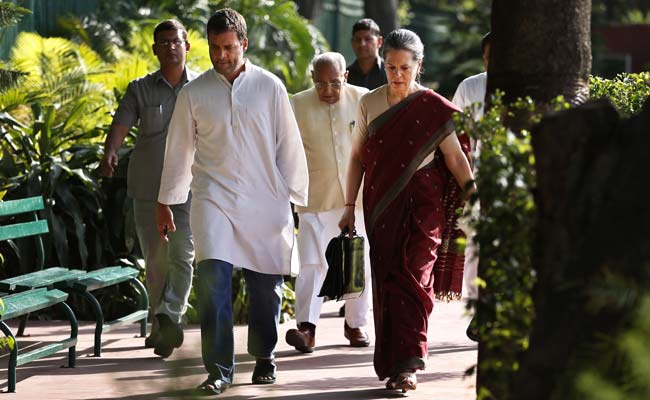 Sonia Gandhi took over as Congress chief in 1998, seven years after Rajiv Gandhi was assassinated

But formalities apart, he is, however, already believed to have taken charge. It was Rahul Gandhi who had rebuked veteran leader Mani Shankar Aiyar when he scored a goal against his own team with his "neech aadmi" comment against Prime Minister Narendra Modi and later decided to suspend the Gandhi family loyalist.

Mrs Gandhi is expected to continue to head the Congress Parliamentary Party. For most parts, Rahul Gandhi would have a free hand. Asked what role she would play after her son's elevation, Mrs Gandhi said: "My role is to retire". Mrs Gandhi told NDTV Rahul Gandhi had been helping decide vital party issues for years.

Sources have told NDTV that the generational shift would trickle down to other posts as Mr Gandhi gets down to forming his team over the next few months but he was likely to draw on the experience of the party's "old guard" in advisory roles.
Comments
Rahul GandhiRahul Gandhi Congress presidentCongress president-elect Rahul Gandhi