Shortly after his arrival in Bhopal, Rahul Gandhi will begin a 15-kilometer-long roadshow from Lalghati. 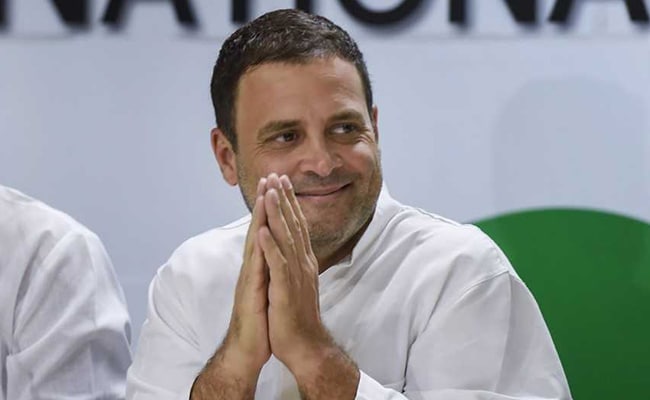 Congress president Rahul Gandhi will on Monday launch his party's campaign in poll bound Madhya Pradesh, known to be a BJP bastion, from Bhopal, where posters have come up describing him as a devotee of Lord Shiva.

He will take part in a roadshow and also address party workers during his day-long visit to Bhopal.

Shortly after his arrival in Bhopal, Rahul Gandhi will begin a 15-kilometer-long roadshow from Lalghati Chowk, located close to the airport, after seeking the blessings of more than 11 Hindu priests, state party spokesperson Pankaj Chaturvedi told PTI on Sunday. He will interact with party cadres at the end of the road show.

Besides, he is going to address a meeting of Congress workers, which is open to public, before leaving in the evening, he added. "We are upbeat as our leader is coming to launch the election campaign," Mr Chaturvedi said.

Ahead of the visit, the main opposition party has put up posters and banners in Bhopal describing the 48-year-old Congress chief, who just returned from a pilgrimage to Kailash Mansarovar, as a 'Shiv bhakt'.

Security has been tightened in the city in view of Mr Gandhi's visit, Bhopal Inspector General (IG) of Police Jaideep Prasad said. "We have got an extra force of 1,500 policemen who have already been deputed," he said.

Asked about the possibility of protests during Rahul Gandhi's visit, Mr Prasad said they had not received any information in this regard. "All steps are being taken to maintain law and order. I am personally monitoring the security arrangements and the routes Rahul Gandhi is going to pass through," he said.

Congress workers are arriving from all over Madhya Pradeshto welcome the party chief and take part in the meeting. "We are expecting more than one lakh Congress cadres in the state capital," a police officer said.

Meanwhile a BJP leader said party chief Amit Shah and Prime Minister Narendra Modi will attend a function in Bhopal on September 25. Earlier, a visit by Amit Shah to Ujjain on September 12 was put off.

"It was a tentative programme of Shahji that has been postponed as he along with Prime Minister Narendra Modi is going to grace a function on September 25 here," state BJP spokesperson Rajnish Agrawal said.

Asked whether Amit Shah had deferred his Ujjain visit to avoid the ire of upper caste organisations, Mr Agrawal replied in the negative.

On September 6, some upper caste groups called for a 'Bharat Bandh' against Parliament approving amendments in the Scheduled Castes and Scheduled Tribes (Prevention of Atrocities) Act after some of its provisions were read down by the Supreme Court.

Four days ahead of the bandh, members of an anti-quota organisation had allegedly hurled a slipper at Madhya Pradesh Chief Minister Shivraj Singh Chouhan during a public meeting in Sidhi district and showed him black flags