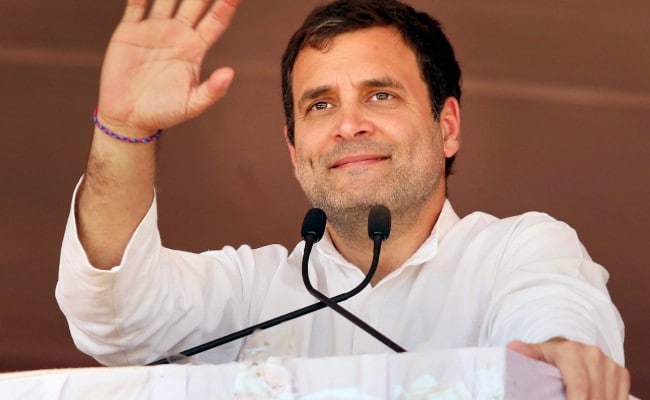 Congress chief Rahul Gandhi, in an oblique jab at Prime Minister Narendra Modi, posted what he said was a new word in the English dictionary. The word, "Modilie," -- a jibe at PM Modi -- is defined as "to constantly Modify the truth".

"There's a new word in the English Dictionary. Attached is a snapshot of the entry," tweeted Mr Gandhi. The screenshot is a photoshopped version of the Oxford Dictionary website with only minor differences, primarily to the logo.

The word, although listed as a noun, has some varying definitions -- "To lie incessantly and habitually" and "To lie without respite". Examples listed in the "dictionary" are use variants of the word; "Modiliar" and "Modilying".

There's a new word in the English Dictionary. Attached is a snapshot of the entry :) pic.twitter.com/xdBdEUL48r

The Congress president has repeatedly accused PM Modi of lying on issues, most prominently the Rafale fighter jet deal. Mr Gandhi has also accused the Prime Minister of not fulfilling promises made him and lying on developmental issues.

The tweet reminded many on Twitter of Mr Gandhi's swipe at Finance Minister Arun Jaitley in December 2017. The Congress chief was then accused by the BJP of "intentionally twisting" Mr Jaitley's name by spelling it as "Jaitlie" in his tweet.

Dear Mr Jaitlie - thank you for reminding India that our PM never means what he says or says what he means. #BJPLiespic.twitter.com/I7n1f07GaX

Many BJP supporters were not impressed and took to Twitter to "bust" Mr Gandhi's "lie", pointing out that the word did not really exist in the dictionary. Several Congress supporters, on the other hand, cheered the party chief on what they saw as a clever taunt.

I searched for the world 'Modilie' in oxford dictionary. Here's what I got! pic.twitter.com/FmQRzGcmi6

Rahul Gandhi, who has 5.15 million Twitter followers, has become a lot more tech-savvy since taking charge as the Congress President in December 2017. His Twitter activity has soared since and his jibes at PM Modi and the BJP are seen to have become sharper and wittier.