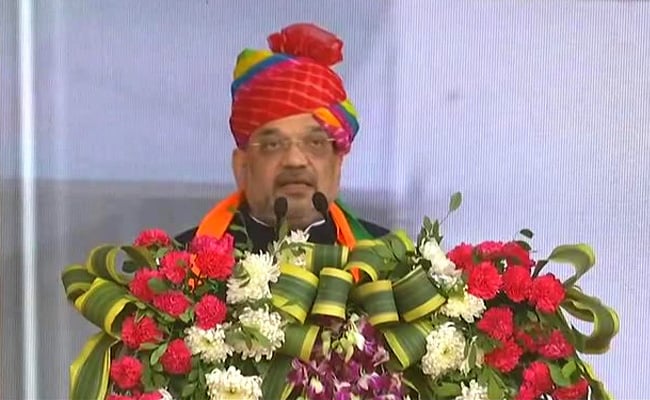 The CAA has no provision of taking back citizenship, Amit Shah said (File)

"This is an answer to all those opposing the CAA. Tell me if these Sikhs who were attacked the other day at Gurdwara Nankana Sahib will not come to India, then where they will go?" he asked.

Opposition leaders were spreading lies over the CAA, he said, asking BJP workers to carry out an intensive campaign to inform the masses about its merits.

Its beneficiaries are largely Dalits and poor, and those opposing the law are against these people, Mr Shah said.

"Prime minister came out with CAA. It was approved by the Cabinet and Parliament passed it. (Arvind) Kejriwal misled people; the Congress, especially Rahul Gandhi and Priyanka Gandhi, instigated riots by misleading people. Do you want a government in Delhi which incites riots for politics," he asked.

The opposition was inciting minorities against the CAA by alleging that they will lose their citizenship, he said.

"I want to tell brothers and sisters from the minority that none of them can lose their citizenship because the CAA has no provision about taking it away," Mr Shah said.

The BJP leader also claimed that Congress general secretary Priyanka Gandhi Vadra had extended her support to rioters by saying that she will visit houses of those who carried out riots.

The CAA seeks to grant citizenship to Hindus, Sikhs, Buddhists, Christians, Jains and Parsis who had arrived in India by December 31, 2014 from Pakistan, Afghanistan and Bangladesh due to religious persecution.