Addressing the state level convention of Mahila Congress in Kota, Mr Gandhi said the unlike BJP and the RSS, the Congress promotes women in all fields 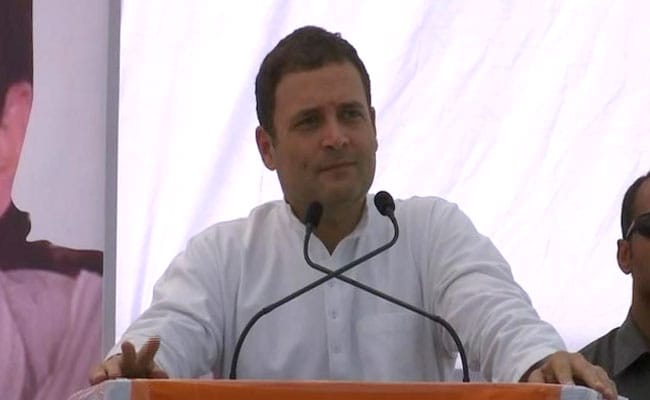 Rahul Gandhi at the state level convention of Mahila Congress in Kota.

Congress President Rahul Gandhi today emphasised for more participation of women in the party across all levels and said that he would like half his party's chief ministers in the country to be women in the next five to seven years.

Addressing the state level convention of Mahila Congress in Kota, Mr Gandhi said the BJP and the RSS think women should not go out of their houses, while the Congress promotes women.

"This is the difference between BJP and Congress. BJP and RSS say that women should not be progressive and should not go out of the houses. You will not find a single woman in RSS meetings. They (BJP) have an organisation of women but that organisation does not take decisions and the decision is taken there by the men," he said.

He said that chief minister in the BJP ruled Rajasthan is a woman, but her thoughts are not for women.

Talking about his aim, the Congress President said, "I have taken the decision that I will promote the participation of women in the organisation and at the level of zila parishad, pradhan and then at the level of MLA and MP. After that I want that in next 5 to 7 years, half of our chief ministers in the country should be women."

As the party chief, Mr Gandhi said, his role may be that of a "judge" in the party but he would be willing to be the "lawyer" of women in order to promote them and to enhancement their presence in the organisation.

He said that winnability should indeed be criteria in deciding for a candidate in election but women too can win.

"I want that when I read out the list of leaders at such programmes, at least 30-40 per cent should be of women in every state," he said, while telling the members of the mahila Congress that he was not giving any gift but was giving them their right.