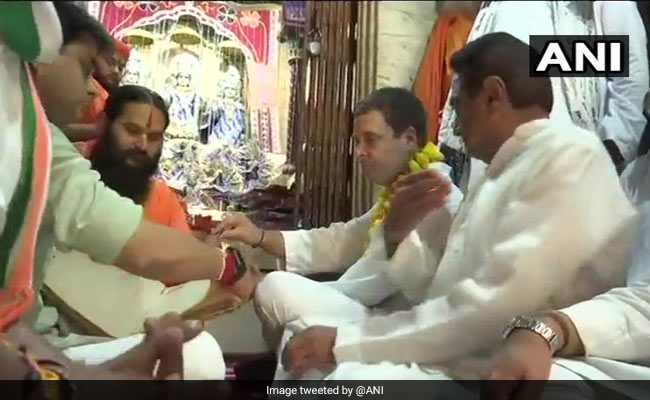 Mr Gandhi reached Chitrakoot, a religious town closely associated with Lord Ram, from Allahabad by helicopter and stayed in the temple premises for about half-an-hour, where he prayed.

The Kamta Nath temple is located on the forested hill of Kamadgiri where, according to mythology, Lord Ram stayed during his exile.

Mr Gandhi addressed a corner meeting at Chitrakoot before leaving in a helicopter to Satna city, where he addressed a public meeting.

The Congress chief is scheduled to hold a roadshow in Rewa later this evening.

The Congress has been out of power in Madhya Pradesh since 2003.

During his earlier visit on September 17, Rahul Gandhi held a roadshow in Bhopal after performing a puja and taking blessings from 11 priests.

He had visited the state after returning from the Kailash Mansarovar yatra, which he undertook to pay obeisance to Lord Shiva.

Ahead of Mr Gandhi's last visit, posters were put up in Bhopal, calling him a 'Shiv bhakt' (devotee of Lord Shiva).

"They Ought To...": BJP Versus Nitish Kumar's Party on Agnipath, Round 2