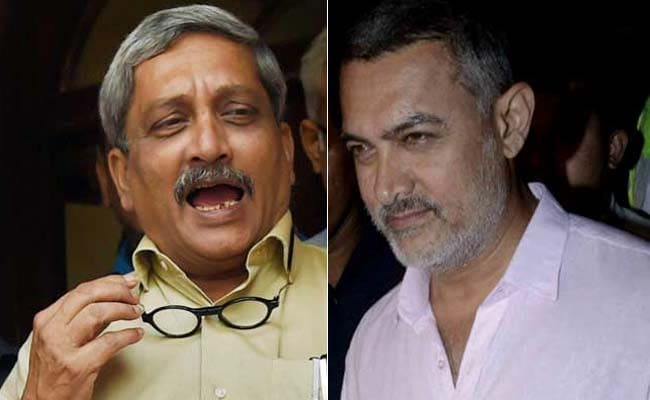 Manohar Parrikar took a swipe at Aamir Khan for his intolerance remarks.

New Delhi/Jabalpur: The Congress today mounted a fierce attack on Defence Minister Manohar Parrikar and RSS over his jibe at actor Aamir Khan for remarks on intolerance with Rahul Gandhi saying "hate is the preserve of the coward and it never wins."

The main opposition party also accused the BJP and the RSS of a "concerted conspiracy" to hound Dalits, minorities, writers, actors and whoever dissents against the Modi government and wondered whether Parrikar's job is to protect India from external aggressors like Pakistan or threaten fellow countrymen.

"RSS & Parrikarji want to teach everyone a lesson. Here's a lesson for you: hate is the preserve of the coward and it never wins," the Congress Vice President said on Twitter.

Mr Parrikar had yesterday said anyone speaking against the country must be "taught a lesson" and had referred to alleged anti-national sloganeering at JNU earlier this year and remarks by an "actor" who "had said that his wife wants to live out of India". He did not name any actor but it was a veiled reference to Mr Khan's outburst.

Mr Khan had late last year spoken about a "sense of insecurity" resulting from increasing intolerance in the country, and mentioned his wife Kiran Rao's apprehensions about the future of their child in India.

Facing flak, Mr Parrikar today said he never used the word 'lesson' and that what he meant was, "you have to build pressure, you have to build public opinion that people who love their country should not be silent on these issues."

"Those who speak against the country, there has to be a public opinion about that. I was not pointing out at anyone specifically," he said at an event in Jabalpur. "I was speaking only about those who want bad for this country. I was not talking about freedom of speech."

According to Mr Parrikar, when the actor made the statement last year, many people had protested against his remark and even uninstalled the mobile application of an online shopping site he was associated with, while the firm had also pulled out the advertisement featuring him.

Congress spokesperson Randeep S Surjewala said it was a "shocking revelation" by Parrikar and showed that BJP and RSS supporters actively disrupted and sabotaged an online trading company on Aamir Khan issue.

"Shameful that @manoharparrikar threatens 'teaching a lesson' to 'actors', instead of training his guns elsewhere," "Scandalous," he tweeted questioning whether Mr Parrikar's job is to protect India from external aggressors like Pakistan or threaten fellow countrymen.

"@manoharparrikar's statement proves a concerted conspiracy to curb all dissent, hound Dalits & Minorities. Can this be the 'Raj Dharma'?," he tweeted.