Criticised For Jibe At Aamir Khan, But Manohar Parrikar Holds His Ground 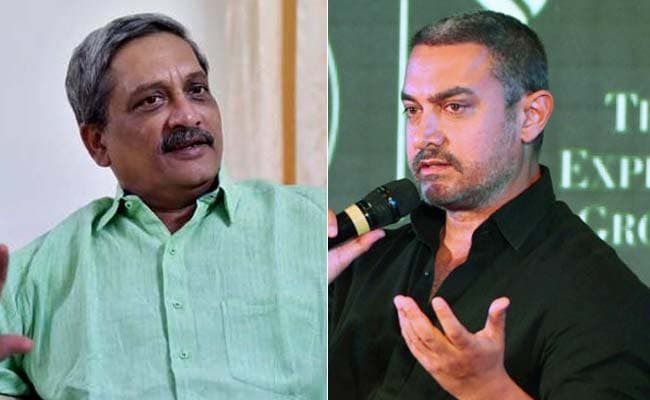 Panaji: Even though his apparent jibe at actor Aamir Khan over the intolerance issue created a flutter, Defence Minister Manohar Parrikar today stuck to his guns and claimed that many people told him what he had stated was right.

The union minister also alleged many people were creating an atmosphere of hatred against the BJP and have sympathy for anti-social elements.

Speaking at a function in Pune last week, Mr Parrikar had said, "One actor had said that his wife wants to live out of India. It was an arrogant statement. If I am poor and my house is small, but I have to love my house and always dream to make a bungalow out of it." He had also said those who speak against the nation need to be taught a lesson by the people.

Mr Parrikar's remarks created a controversy with Congress mounting a fierce attack on him. "RSS & Parrikarji want to teach everyone a lesson. Here's a lesson for you: hate is the preserve of the coward and it never wins (sic)," Congress Vice President Rahul Gandhi had said on Twitter.

Aamir Khan had late last year spoken about a "sense of insecurity" resulting from increasing intolerance in the country, and mentioned his wife Kiran Rao's apprehensions about the future of their child in India.

While speaking at the convention today, Mr Parrikar said, "They can't digest the fact that BJP is taking people from all strata into its fold. That is why people are trying to create misunderstanding."

"So many people are working towards creating hatred towards BJP. That is why they have sympathy even towards some anti-social elements," he added.

According to the former Goa Chief Minister, some people have "wrong thinking" towards the government.

"The BJP government under Modi is showing the world how to govern. Because of this, some political parties which are opposing it will disappear with time," he said.