Tuesday's tweet seems to address that comment, if anyone ever doubted Rahul Gandhi's prowess in the Japanese martial arts form Aikido that is based on the concept of resolving conflict in a non-lethal, non-disruptive, yet effective way. 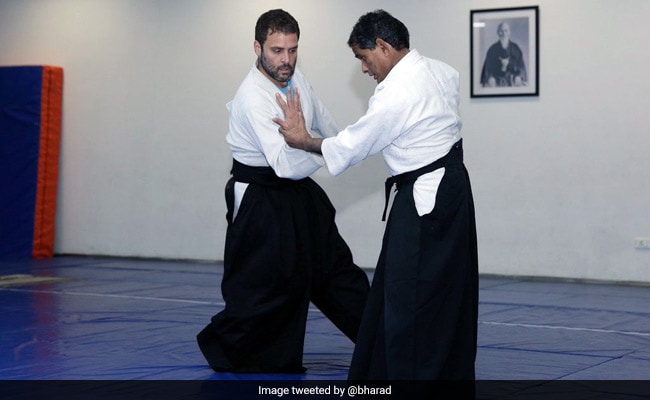 Rahul Gandhi is seen in various positions of Japanese martial art Aikido with a Sensei.

New Delhi: Rahul Gandhi's Aikido moves made a splash on social media today, just days after a flap over "Pidi Gandhi" - the pet that the Congress Vice President quipped was tweeting from his handle @officeofRG.

In a tweet shared by Congress and actor-turned-politician Divya Spandana, the 47-year-old is seen in various Aikido positions with a Sensei, Paritos Kar. The tweet confirms what he had shared with an audience last week, responding to a question by Olympian Vijender Singh.

"I am a black belt in Aikido - have you heard of it? But I don't talk about it publicly. I do one hour of sports every day, though I admit I haven't been doing much in the past three-four months," Mr Gandhi said at a business event, when Vijender commented that politicians rarely promoted or participated in sports.

The champion boxer suggested, why not put up a video to inspire people? "Fine...I will..." Mr Gandhi had replied, grinning. 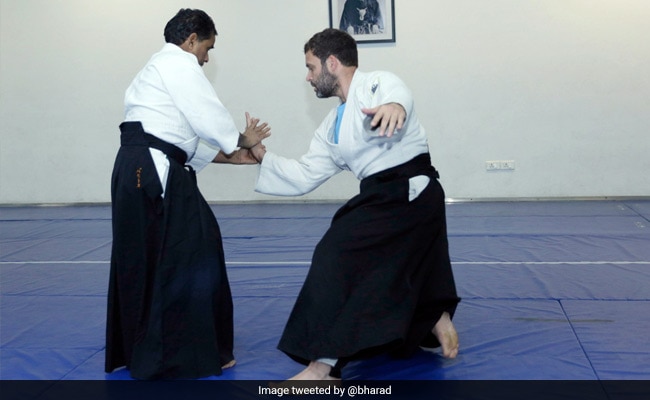 Rahul Gandhi said he is a black belt in Aikido and that he does an hour of sports every day.

Tuesday's tweet seems to address that comment, if anyone ever doubted the Congress leader's prowess in the Japanese martial arts form that is based on the concept of resolving conflict in a non-lethal, non-disruptive, yet effective way.

The tweet, which has drawn over 800 likes and nearly 370 re-tweets, is another example of the social media re-branding of Congress's number two leader and the chief-in-waiting.

Pidi Gandhi - a sarcastic comeback to critics who snark that someone else has been tweeting for the Congress vice president and is thus responsible for his newfound social media savvy  - became a top trend and stayed there.

A comment by BJP leader Himanta Biswas added a political twist to the buzz. "Sir @OfficeOfRG, who knows him better than me. Still remember you busy feeding biscuits to him while we wanted to discuss urgent Assam's issues," posted the former Congressman who quit the party in Assam protesting against what he called the apathy of Mr Gandhi. After joining the BJP, he delivered several wins in the north east for the party.

Promoted
Listen to the latest songs, only on JioSaavn.com
Mr Gandhi has four million followers on Twitter. He has recently ramped up his Twitter engagement, delivering sharp jibes at the BJP, the government and Prime Minister Narendra Modi.

The BJP has accused Mr Gandhi of using bots or fake accounts to inflate his following on the site, but the Congress rubbishes the charge.