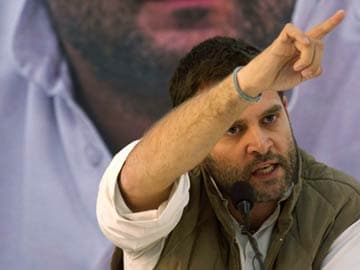 New Delhi: Congress vice-president Rahul Gandhi today said that Narendra Modi's government in Gujarat "abetted" the riots of 2002. Mr Gandhi's charge injected a tense new element into a general election campaign that has so far focused mainly on the economy and corruption.

Rights groups and political rivals have long alleged the Gujarat Chief Minister allowed or actively encouraged the attacks. Mr Modi has always denied this, and a Supreme Court inquiry found no evidence to prosecute him.

"The government in Gujarat was actually abetting and pushing the riots further," Mr Gandhi said to a private news channel, though he was far less direct than the Prime Minister, who said recently that Mr Modi had "presided over mass massacre in Ahmedabad." (Read)

"The government in Gujarat was allowing the riots to happen," Mr Gandhi said.

Mr Gandhi, 43, is helming the Congress campaign for the national election, due by May, though he has not been named its prime ministerial candidate.

In his interview, he accused Mr Modi of running the BJP like a one-man show.

"The BJP believes in concentration of power in the hands of one person. I fundamentally disagree with that. I believe in democracy, I believe in opening up the system," Mr Gandhi said.

Promoted
Listen to the latest songs, only on JioSaavn.com
Mr Gandhi refused to apologise for the riots that tore through Delhi in 1984, in which hundreds of Sikhs were killed in retaliation for the assassination of his grandmother and former Prime Minister Indira Gandhi.

Due To Use Of Technology, Centre "Saved Rs 2 Lakh Crore": Finance Minister