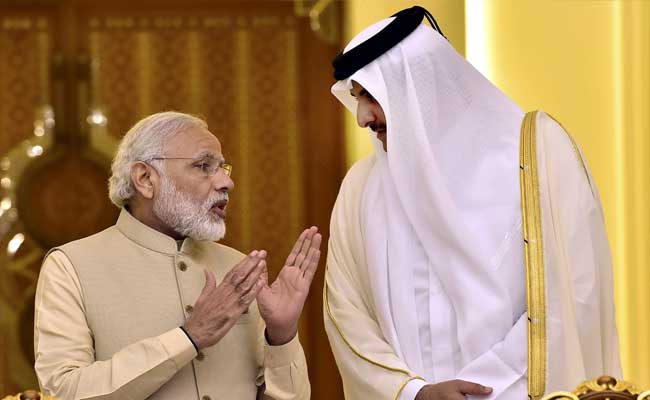 PM Modi at an Indian workers' camp in Doha had assured that the difficulties faced by migrants will be discussed with the Qatar leadership. (PTI photo)

New Delhi: Qatar has reassured India that labour reforms will improve the conditions of more than half a million Indian migrants, after Prime Minister Narendra Modi raised concerns of abuses during a weekend visit to the Gulf state, a statement said on Monday.

Qatar is home to 630,000 Indians, the single largest group of migrants in the country of 2 million. Many work in low paid construction jobs, building stadiums and other infrastructure for the 2022 World Cup.

"The Qatari side briefed the Indian side on the reform in labour laws which would protect the interest of skilled and unskilled labour in Qatar," said the statement issued by the prime minister's office.

PM Modi thanked the Qatari leadership for "hosting the Indian community and for ensuring their continued welfare and safety."

Qatar is an important partner for India, with bilateral trade in 2014-15 exceeding $15 billion, according to the Indian government. It is also one of India's key sources of crude oil.

During his two-day visit to the Gulf nation, PM Modi addressed a gathering of Indian labourers in Doha, assuring them he would present their concerns to Qatari authorities.

"I am aware of the issues you are facing. I will talk about it when I meet the authorities," PM Modi told them on Saturday.
"If you have some issues on changing some laws and regulations, I can assure you that I will work with you all to bring about these changes," he added.

PM Modi's comments come amid growing scrutiny of Qatar over the plight of migrants from countries such as Nepal and Bangladesh as well as India employed to build infrastructure as Qatar gears up to host the world's largest sporting event.

Amnesty International in March said migrants faced abuses that in some cases amounted to forced labour. Workers reported squalid living conditions, having their salaries withheld for months and their passports confiscated by employers.

Qatar's kafala sponsorship system - under which migrant workers cannot change jobs or leave the country without their employer's permission - is at the heart of threats to make people work, Amnesty said.

The International Labour Organization said Qatar is making progress towards ending forced labour and improving migrant worker conditions, but added the real test will be whether it enforces new legislation from December.

The new Qatari law abolishes the kafala sponsorship system and removes all curbs on worker movements. Migrants will no longer be forced to continue a job if there is abuse or exploitation, but domestic workers are excluded from this law.

PM Modi said he believed Qatar would respond positively to challenges faced by the Indian community in the country.

"I have been given a long list of all the problems that you face. I have studied it in detail and will address them over the next two days," PM Modi had told the Indian labourers on Saturday, adding, "Despite these issues, the people here are very fond of Indians, they trust Indians, and I am sure that when we raise these concerns, they will respond positively."
© Thomson Reuters 2016