Ahead of Punjab Poll, AAP Promises Justice In 2015 Sacrilege Case

Punjab: AAP accused Chief Minister Amarinder Singh and the Badals of being hand in glove with each other, as it criticised the government for not bringing the perpetrators in the desecration case to justice. 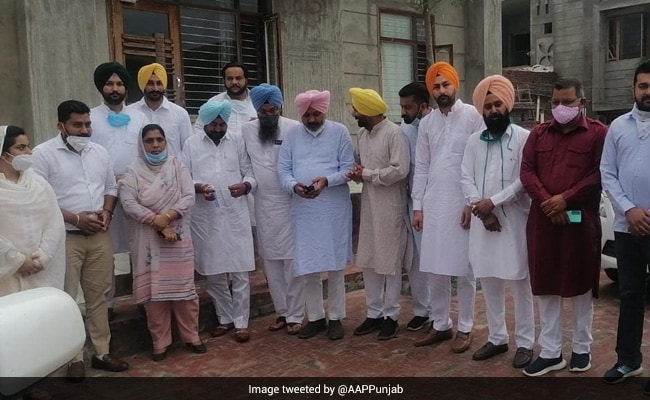 AAP leaders met the family of one of the youths killed in the police firing.

Aam Aadmi Party (AAP) leader Harpal Singh Cheema on Tuesday said his party, if voted to power in Punjab during the 2022 Assembly elections, will bring those responsible for the desecration of Guru Granth Sahib to justice.

AAP leaders led by Mr Cheema, who is a legislator and Leader of Opposition in the Punjab Assembly, on Tuesday paid obeisance at a gurdwara in Faridkot. Later, the AAP leaders went to meet the family of one of the youths who was killed in the police firing incident, according to a party statement.

Mr Cheema said it was unfortunate that it had been more than six years since two persons, demanding justice for the desecration of a religious text, were killed in the police firing, but no justice had been done so far.

He said Chief Minister Amarinder Singh had taken an oath of "Gutka Sahib" (religious book) before the 2017 Assembly elections while promising to take action against the perpetrators of the desecration of Guru Granth Sahib and subsequent police firing incidents in 2015.

He alleged that the Chief Minister and the Badals were hand in glove with each other.

The incident of desecration of a religious text and subsequent police firing had taken place in Faridkot in 2015 when the Shiromani Akali Dal (SAD)-BJP government was in power.

Two persons were killed in police firing at anti-sacrilege protesters at Behbal Kalan in 2015.

How Is This Defamation?: High Court On Shilpa Shetty's Plea To Gag Media