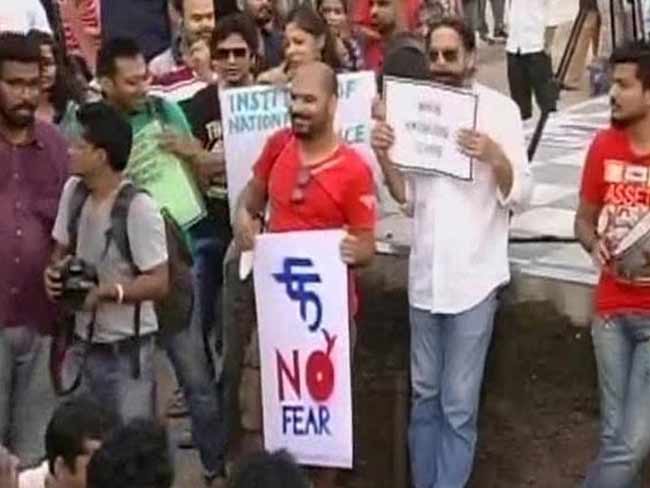 Students of FTII are demanding the removal of Gajendra Chauhan as chairman.

New Delhi: A delegation of FTII students protesting against the appointment of TV actor Gajendra Chauhan as its Chairman, have met senior officials of the Ministry of Information and Broadcasting, though no breakthrough was achieved in the ongoing logjam.

The students of the prestigious Pune-based Film and Television Institute of India (FTII), who today also brought their stir to the national capital, met K Sanjay Murthy, Joint Secretary (Films) in the ministry.

Mr Murthy said that they had sought a meeting with Union Information and Broadcasting Minister Arun Jaitley or his deputy Rajyavardhan Singh Rathore, though no such assurance was made by the officials present.

Both sides, however, were keen that communication channels should remain open.

"We asked the Joint Secretary if an official meeting can take place between students and either of the ministers. The official did not promise us anything, but said, he will speak to the minister first and then get back to us. We are hoping the minister agrees to it and a channel of communication opens up," said Vikas Urs, member of the delgation.

Reiterating the protesters' demands, Mr Urs said the demonstrations will continue until the government listens to the agitating students.

Sources in the I&B ministry, meanwhile, confirmed that a meeting had taken place between senior officials and students, and added, the ministry is open to any positive proposal emerging from the students' side.

They, however, said that the students' delegation did not have a "firm roadmap" but they were willing to have more communication and dialogue which would benefit the institution and its students.

The students have been demanding dissolution of the current FTII Society and that it be kept in abeyance.

They have also demanded formation of a committee, with bureacrats, filmmakers and academicians as its members, to frame rules and guidelines for setting up a new society.

"Gajendra Chouhan and five others do not have academic and artistic credentials to head any educational institute.

Second thing is that they have come on the basis of his affiliation with a certain political party," Mr Urs alleged.

"Beyond that they have not done any work of importance in the circle of art or film. In this context, if such people head the institute, then the academic vision of the institute will nullify. We want the right people to come here," he claimed.

Meanwhile, sources said that the Informationm and Broadcasting Ministry had earlier also taken initiatives to try and open a "track two" dialogue to resolve the situation.

Filmmakers like Vidhu Vinod Chopra, Raj Kumar Hirani and some students they said, had even met top ministry functionaries few days ago and expressed hope that a solution would emerge.