Omar Abdullah and Mehbooba Mufti said intimidating Kashmiris is aimed at creating a wedge between different communities in India. 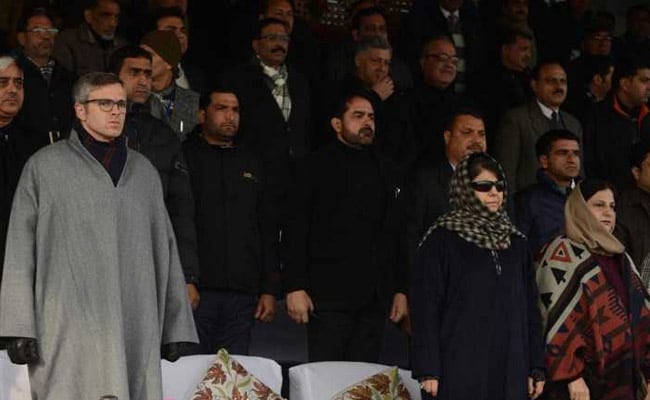 Reacting to the reports of attacks on Kashmiris in some parts of the country after over 40 CRPF soldiers were killed in a terror attack in Pulwama, Jammu and Kashmir's most prominent political leaders, Omar Abdullah and Mehbooba Mufti, on Monday released a joint appeal, saying it was the terrorists that attacked the soldiers, not "Muslims" of the state. The leaders called the reported violence as a "tool to shift the blame, and warned it could "indisputably disenchant" people of the state.

Mr Abdullah and Ms Mufti are bitter political rivals and they often engage in a war of words on Twitter. But the reports of violence against Kashmiris brought them on the same page.

"Intimidating Kashmiris is aimed at creating a wedge between different communities in India. We should not allow the terror to divide us. By using such incidents to divide us, we fall into the trap of those behind the attack on CRPF soldiers; we are wittingly or unwittingly playing to the tunes of our enemies," Mr Abdullah and Ms Mufti said in a joint statement.

"Kashmiri Muslims or the Muslims of Jammu didn't attack our CRPF Jawans the other day, terrorists did. This violence is a convenient tool by some to shift the blame. Let us unite against terror, let's not allow terror to divide us," they said.

A suicide bomber belonging to terrorist group Jaish-e-Mohammad rammed a vehicle, laden with explosives, to a convoy of CRPF. Over 40 soldiers died in the attack, triggering a wave of anger across the country.

Barely days after the attack, there were reports that people from Jammu and Kashmir were being targetted in other parts of the country. Some reports said that Kashmiri traders were roughed up in Bihar. There were reports of Kashmiri students being asked to vacate houses, where they had been living as tenants, in Uttarakhand.

The two former chief ministers said it was tragic to see educated and civilized people spearheading vicious propaganda to paint Kashmiris and terrorists with the same brush. "It doesn't augur well for a democratic country like India to hound its own people in its response to the heinous attack on our forces. Hounding innocent Kashmiris will indisputably disenchant them; the humiliation, suspicion, isolation will push innocent Kashmiris to the wall," they said.

After reports of Kashmiris being hounded came out, the central government released an advisory, asking the state governments to assure safety of the people of Kashmir.

A shutdown had been called in Kashmir against the reported cases of harassment.