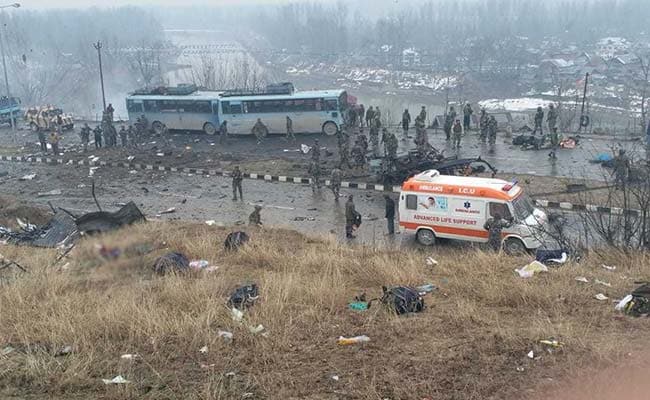 Politicians from across parties expressed shock at the Pulwama terror attack.

Politicians from across parties expressed their shock at the terror attack on a Central Reserve Police Force (CRPF) convoy in Jammu and Kashmir's Pulwama today in which nearly 40 soldiers were killed and dozens injured.

Pakistan-based terror group Jaish-e-Mohammed has claimed responsibility for the attack in Pulwama's Awantipora.

Rajnath Singh, who will visit Srinagar tomorrow, spoke to the Jammu and Kashmir Governor, CRPF chief and the Home Secretary. Union Minister Arun Jaitley, in a tweet, said the terrorists will be be given "unforgettable lesson for their heinous act".

Home ministry sources said that terrorists triggered the car bomb while the convoy of over 70 CRPF vehicles was plying through the Srinagar-Jammu Highway in Goripora area. One of the vehicles bore the brunt of the explosion. The stretch on which the incident occurred was largely believed to be sanitised of terror activities, and the authorities have termed it as a "serious breach" of security.

Jammu and Kashmir politicians Mehbooba Mufti and Omar Abdullah were among the first to condemn the attack. "No words are enough to condemn the gruesome terror attack. How many more lives will be snuffed out before this madness ends?" People's Democratic Party chief and former chief minister Mehbooba Mufti tweeted.

Disturbing news coming in from #awantipura . Twelve of our security personnel have been martyred and several have been injured. No words are enough to condemn the gruesome terror attack. How many more lives will be snuffed out before this madness ends?

"I condemn this attack in the strongest possible terms. My prayers for the injured & condolences to the families of the bereaved," National Conference leader and former chief minister Omar Abdullah tweeted.

Terrible news coming from the valley. A number of CRPF soldiers are reported to have been killed & injured in an IED blast. I condemn this attack in the strongest possible terms. My prayers for the injured & condolences to the families of the bereaved. #Kashmir

West Bengal Chief Minister Mamata Banerjee expressed her condolences to the families of the CRPF soliders who were killed. "Saddened that 13 CRPF jawans became martyrs today in Pulwama. We salute our brave jawans and extend our solidarity and condolences to their families. Our prayers for those injured. We wish them a speedy recovery," she tweeted.