Protests In Andhra Pradesh Ahead Of PM Modi's Visit Tomorrow

Protests were staged in 13 districts of the state by leaders and workers of the ruling Telugu Desam Party (TDP), the Congress, Left parties and student groups. 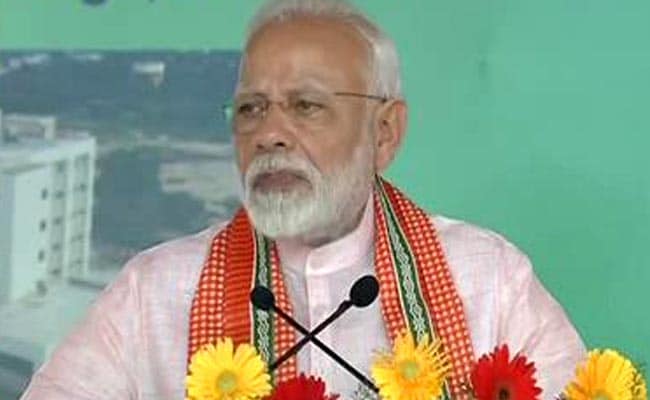 PM Modi will address a rally in Andhra Pradesh's Guntur on Sunday.

A day ahead of Prime Minister Narendra Modi's visit to Andhra Pradesh, protests were held at various places in the state today with protesters raising 'Modi go back' slogans.

Protests were staged in 13 districts of the state by leaders and workers of the ruling Telugu Desam Party (TDP), the Congress, Left parties, student groups and mass organisations fighting for the special category status for Andhra Pradesh.

Carrying black flags, they took out rallies and staged sit-ins at different places. Some could also be seen shirtless.

Leaders of the Left parties held protests by smashing empty pots in Vijayawada. They also threatened to disrupt Modi's rally in Guntur on Sunday.

Addressing a meeting in the Nellore district today, Chief Minister N. Chandrababu Naidu said PM Modi had no right to visit the state as he betrayed Andhra Pradesh by not fulfilling the promise to accord special status and other commitments made in the Andhra Pradesh Reorganisation Act 2014.

Communist Party of India (CPI) state Secretary K. Ramakrishna said PM Modi had no moral right to visit the state as he did not honour the commitments made in Parliament.

CPI-M leader P. Madhu said party workers would hold protests with empty pots in Guntur to foil PM Modi's rally. He recalled how PM Modi had come to the stone laying ceremony of Amaravati, the new state capital, carrying a pot of soil and water and promised all help to the state. "He has gone back on every promise he made," said Mr Madhu.

State Congress chief Raghuveera Reddy said his party would organise protests with black flags across the state on Sunday. He appealed to all political parties to join the demonstrations.

Meanwhile, security has been tightened in Guntur ahead of PM Modi's rally. The Special Protection Group (SPG) was busy giving final touches to the security arrangements in coordination with the state police.

State BJP chief Kanna Laxminarayana alleged that the TDP and other parties were planning to disrupt the rally. He said PM Modi would expose the TDP government's corruption and counter its false propaganda by highlighting the steps taken by the Centre to help the state during the last four-and-a-half years.

This will be PM Modi's first visit to Andhra Pradesh after the TDP pulled out of the BJP-led NDA last year.