In a statement, Samyukta Kisan Morcha, which is an amalgam of 40 farmer unions, said "farmers and workers shall take out Tiranga marches to block, tehsil, district headquarters or their nearest Kisan Morcha or dharna" on August 15. 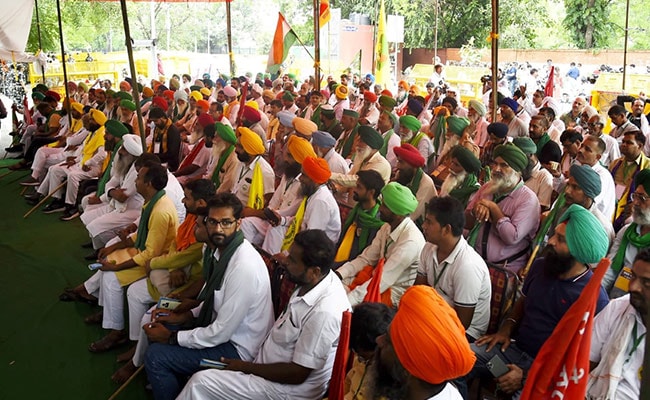 The marches will be taken out with the national flag on cycles, bikes, carts, tractors, etc. (File)

Farmers protesting against the Centre's three agri laws would observe Independence Day as "Kisan Mazdoor Azadi Sangram Diwas" and would take out Tiranga marches across the country, the Samyukta Kisan Morcha (SKM) announced on Wednesday.

In a statement, the SKM, which is an amalgam of 40 farmer unions, said "farmers and workers shall take out Tiranga marches to block, tehsil, district headquarters or their nearest Kisan Morcha or dharna" on August 15.

"These marches will be taken out with the national flag on cycles, bikes, carts, tractors, etc," it said.

The SKM here also reiterated their earlier decision that no "official flag hoisting functions" or "march with the national flag" would be opposed by farmers till August 15.

However, its decision of boycotting BJP leaders and its allies would continue for all other political and governmental activities, it noted.

During the ongoing "Kisan Sansad", which completed its 10th day on Wednesday, the farmers here passed resolutions against the three black laws as well as against the proposed bill on Air Pollution and the Electricity Amendment Bill.

The mock Parliament also witnessed the farmers tabling a "bill" providing a legal guarantee on Minimum Support Price (MSP) for the agriculture produce.

Various speakers during the discussion highlighted the failure of the existing system to offer a remunerative price or even cost price to the farmers, it added.

The Kisan Sansad is being organised by farmers who have been protesting against the Centre's three contentious farm laws at multiple Delhi borders since November last year.

Over 10 rounds of talks with the government that has been projecting the laws as major agricultural reforms have failed to break the deadlock between the two parties.

As part of these Kisan Sansad sessions, 200 farmers from the protest sites participate in the mock Parliament session at Jantar Mantar during which issues concerning the farming community are discussed.