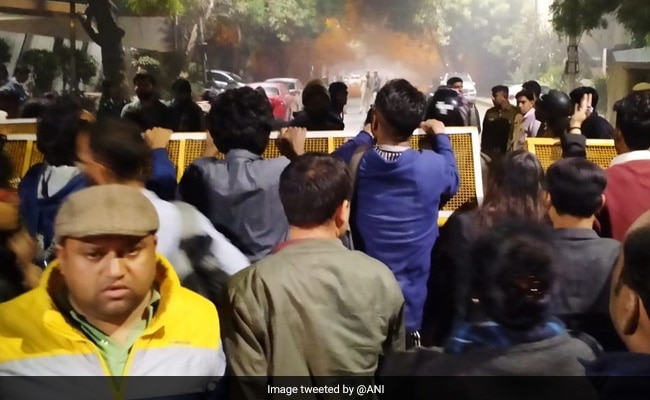 Alumni Association of Jamia Millia Islamia (AAJMI) and Jamia Coordination Committee (JCC) on Wednesday organised a demonstration outside Delhi Chief Minister Arvind Kejriwal's residence, seeking action against those responsible for violence in the national capital and restoration of peace in the city.

Appealing to Mr Kejriwal to take action against the violence in affected areas in North-East Delhi, protesters who called themselves concerned citizens, asked the chief minister to personally visit affected areas with local MLAs and organise peace marches to de-escalate tensions.

They also urged the chief minister to inform citizens about steps taken by the Delhi government and allow all rescue operations to reach hospitals from the affected areas.

They further appealed to identify perpetrators of violence and take action against them.

Late on Tuesday, Chief Minister Arvind Kejriwal called an urgent meeting at his residence, of MLAs and officials of the violence-hit areas of Delhi, to take stock of the situation and issued instructions to take all necessary steps to restore peace.

Union Home Minister Amit Shah also held a meeting with Delhi Police and Home Ministry officials in the wake of violence that has been raging in the national capital for the past two days.

The Home Minister urged political parties leaders to exercise restraint, rise above party lines to tackle the situation, according to an official release.

He also urged leaders to avoid giving provocative speeches and statements which could result in a flare-up of the situation.

At least 13 persons have died so far and around 190 are injured in the violence that has been raging in North-East Delhi from Monday.