We can't fight on issues like this, RJD's Tejashwi Yadav has said. 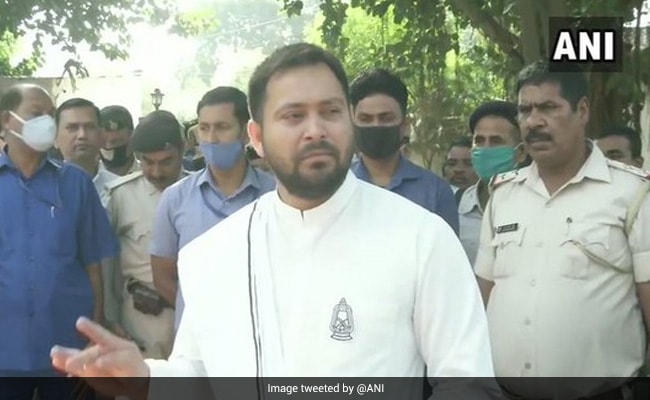 We can't fight on issues like this, Tejashwi Yadav has said.

The Bihar opposition's chief ministerial candidate, Tejashwi Yadav, today condemned the hurling of onions at Bihar Chief Minister Nitish Kumar in Madhubani during a public meeting, saying there are other forms of protest to be used in a democracy.

"I condemn the incident. There are other forms of protest in a democracy like voting. This incident should not have occurred. I don't like this as we fight on issues," Mr Yadav said, according to ANI.

On Tuesday, Onions were thrown at Nitish Kumar when he was campaigning in Madhubani for the state election ending Saturday. The Chief Minister's security personnel formed a shield around him as he continued his speech.

The Chief Minister's security personnel immediately formed a ring around him as he continued his speech.

When the attacker was apparently caught by security personnel, Mr Kumar said: "Let him go, don't pay any attention to him."

"Resolve shown by people has shown that Bihar fights the election on issues like unemployment and migration. The migrant labourers were roughly treated by the government. They were even called criminals," Mr Yadav today said referring to polling for the second phase, ANI reported.

"Despite the Supreme Court order, the Bihar Government kept claiming it will give jobs but nobody got jobs. In flood-hit areas, he never took notice and no team from the Centre came to assess the situation. I believe in the third phase huge voting will take place. It is decided that Nitish Kumar is all set to go," he added.

Bihar recorded a voter turnout of 53.51% in the second phase of state assembly elections on Tuesday. Voting in the third phase will take place on November 7 and the results are scheduled to be declared on November 10.