Priyanka Gandhi is in Allahabad, where she also visited Anand Bhavan, the Nehru-Gandhi family home that has been turned into a museum on the freedom movement.

In images, the Congress leader was seen taking a dip and offering prayers, surrounded by aides. She was also seen on the boat back to the banks; she was seen taking the oars and rowing for a bit.

According to the Press Trust of India, she was with her daughter Miraya and Congress MLA Aradhana Misra. 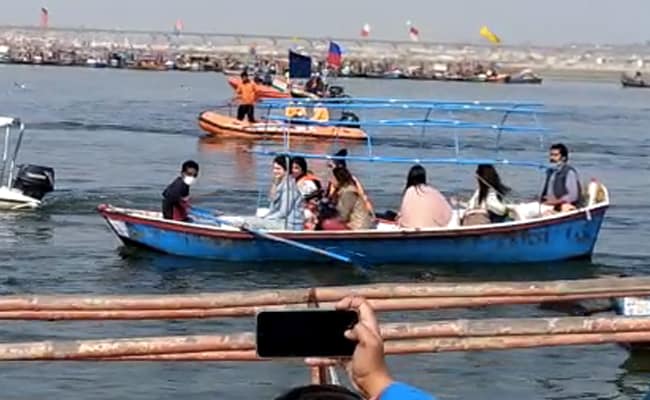 Priyanka Gandhi attended a farmers' mahapanchayat or gathering in Saharanpur yesterday to protest against three new agricultural laws. The Congress's UP in-charge has been visiting the state often in her attempt to revive the party ahead of the state election next year.

At the farmers' meeting, she accused Prime Minister Narendra Modi and other BJP leaders of "insulting" protesters and said: "The three laws are demonic. If voted to power, the Congress will scrap these laws."

The government does not understand farmers or what they stand for, she said, adding, "They (the government) call the farmers anti-national, but in reality, it is them who are anti-national."