Priyanka Gandhi Vadra, Others To Visit Site Of UP Violence Today 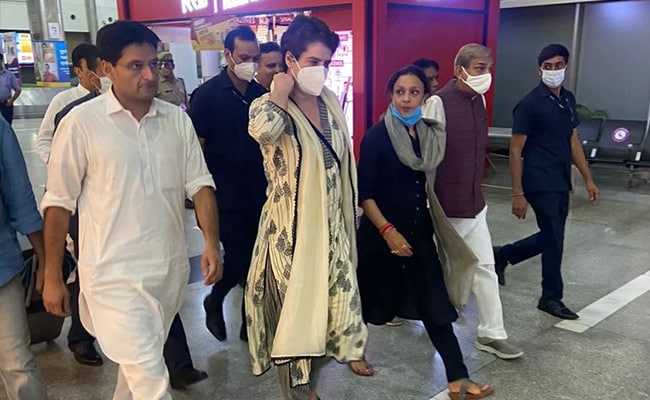 Priyanka Gandhi Vadra will be accompanied by Deepender Hooda and Bhupesh Baghel.

Congress leader Priyanka Gandhi Vadra has left for Lakhimpur Kheri, a party spokesperson said, after the party expressed apprehension that she may have been put under house arrest in Lucknow to prevent her from going there. Earlier, Ms Gandhi was stopped from leaving for Lakhimpur Kheri by the Uttar Pradesh Police.

The Congress general secretary will meet the farmers injured in the violence that erupted during a protest over Uttar Pradesh Deputy Chief Minister Keshav Prasad Maurya's visit to Lakhimpur Kheri on Sunday.

"How much does BJP hate the farmers of the country? Don't they have a right to live? If they raise their voice, will you shoot them, will you crush them with your car? Enough. This is a country of farmers, not a fiefdom of BJP's brutal ideology. Kisan Satyagraha will be strengthened and the voice of the farmer will be louder," Ms Gandhi Vadra had tweeted earlier in the day.

Congress MP Deepender Hooda and Chhattisgarh Chief Minister Bhupesh Baghel, who has been appointed as the Congress's senior observer for the Uttar Pradesh Assembly elections, are also expected to accompany her.

"Departing for Lakhimpur... The martyrdom of farmers cannot be allowed to go in vain. This country also belongs to the farmers," Mr Hooda tweeted in Hindi.

"The barbaric treatment of farmers in Uttar Pradesh is unforgivable. I am a farmer. I understand the pain of the farmer. I will go to Lakhimpur tomorrow morning to stand by them in these difficult circumstances," posted Mr Baghel.

"I strongly condemn the barbaric incident in Lakhimpur Kheri. The apathy of @BJP4India towards our farmer brethren pains me deeply. A delegation of 5 @AITCofficial MPs will be visiting the families of the victims tomorrow. Our farmers will always have our unconditional support," West Bengal Chief Minister and Trinamool boss Mamata Banerjee tweeted.

Eight people were killed in violence in Lakhimpur Kheri district on Sunday, the Uttar Pradesh police has said. According to farmers who were protesting the visit by two ministers, the violence erupted after one of their vehicles mowed down two demonstrators.