With elections around the corner in Uttar Pradesh, the Congress and the Samajwadi Party have been vocal in criticisms of the BJP and the Yogi Adityanath administration 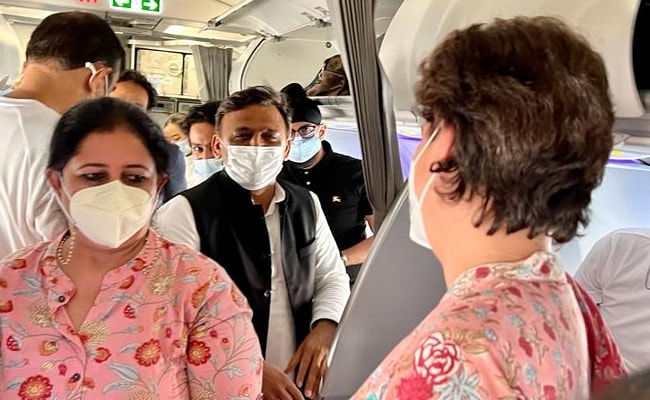 UP will vote for a new government in 2022, with the Congress and Samajwadi Party fighting independently

A widely shared photograph showed the two senior political figures - both wearing face masks in line with pandemic travel regulations - greeting each other inside the plane.

Ms Gandhi Vadra was travelling to Lucknow (and then to Barabanki) to flag off statewide yatras during which the party will communicate its seven "pledges" to voters. Mr Yadav was returning after his visit to Delhi.

With elections around the corner in Uttar Pradesh, the Congress and the Samajwadi Party have been vocal in criticisms of the BJP and the Yogi Adityanath administration.

In 2017 the Congress and the Samajwadi Party joined forces, but the alliance tanked; the Congress won just seven seats and the SP 47 (down from the 224 it won in 2012). The Congress contested 105 seats and the party's abysmal hit rate irked Mr Yadav, who told NDTV he would not ally with them.

"We did not have a good experience in 2017 - we gave them over 100 seats but we could not win. UP has rejected the Congress," he told NDTV in June, adding, "I will not get into any alliance with them."

For its part, the Congress too seems set against any immediate alliance with the Samajwadi Party, particularly in the lights of comments by Ms Gandhi Vadra this month.

After the Lakhimpur incident, she slammed Mr Yadav and BSP chief Mayawati for failing to speak up on behalf of UP's citizens, saying it was only her party that seemed to be holding the BJP to account.

Ms Gandhi Vadra has been taking on the UP government on a number of issues, including the death of four farmers at Lakhimpur Kheri earlier this month. This week she was detained by police (for the second time in a month) after she tried to visit the family of a man who died in police custody.

Ms Gandhi Vadra was earlier held - illegally, she claimed - by police who were ordered to stop her from visiting the families of the four farmers who were run over in Lakhimpur.

Akhilesh Yadav, meanwhile, has been targeting Yogi Adityanath over issues like skyrocketing fuel prices; last week he said UP needs a "yogya" (competent) government and not a Yogi government.