Rahul Gandhi, scaling up his criticism of Prime Minister Narendra Modi a week after the Pulwama terror attack, took up his Congress party's allegation of the PM shooting for a documentary even after receiving the news in his tweets. Using the hashtag #PhotoShootSarkar, the Congress president targeted PM Modi with the term "Prime Time Minister".

"Even three hours after receiving the news of 40 soldiers being killed in Pulwama, 'Prime Time Minister' kept shooting for a film. There was a sea of grief in the hearts of Indians and homes of the soldiers, and he was smiling in his photoshoot at a lake," Rahul Gandhi tweeted.

The BJP's Meenakshi Lekhi hit back with a tweet targeting Rahul Gandhi. "When Pulwama happened PM was shooting for Discovery channel is the new propaganda. Do the likes of Rahul Gandhi and his cronies have any idea whether PM was monitoring minute by minute developments and would have done conferences with relevant people. Rahul Gandhi on 26/11," tweeted the BJP parliamentarian, posting a shot of a newspaper article on Rahul Gandhi "in party mood" after the 26/11 Mumbai terror attacks.

When Pulwama happened PM was shooting for discovery channel is the new propaganda. Do the likes of Rahul Gandhi & his cronies have any idea whether PM was monitoring minute by minute developments and would have done done conferences with relevant people. Rahul Gandhi on 26/11 pic.twitter.com/bttp0J5Z9w

The Congress has cited local media reports to allege that the Prime Minister, who shot a documentary at the Corbett National Park on February 14, continued filming even after learning of the terror attack at 3.10 pm, and wrapped the shoot only at 6.40 pm. The party also said PM Modi left by road for Ramnagar around 6.45 pm, and had tea and snacks at a government guest house at 7.07 pm.

Sources in the government have denied the charge and have put out a different version of the PM's sked that day. 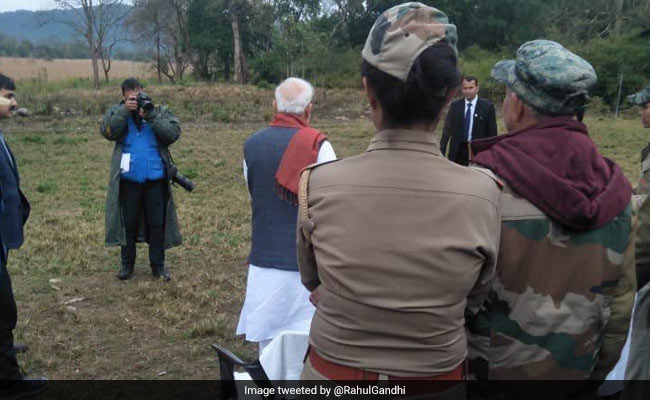 The Congress has cited local media reports to allege that the PM continued filming even after learning of the terror attack.

They claim there was a 25-minute delay in informing PM Modi of the Pulwama attack because of bad weather and poor network coverage. The Prime Minister, sources said, left for Dehradun in the morning and was stuck there for four hours because of the weather. They said he reached Jim Corbett Park around 11.15 am, where he spent three hours inaugurating a tiger safari, an eco-tourism zone and a rescue centre. He then took a motorboat ride, the sources said. They asserted that PM Modi cancelled a rally after the Pulwama news and sought updates from National Security Adviser (NSA) Ajit Doval, Union Home Minister Rajnath Singh and Jammu and Kashmir Governor Satya Pal Malik. The Prime Minister also "did not have anything to eat", the sources claimed, countering the "snacks" taunt.

Over 40 CRPF personnel were killed after a suicide bomber rammed his vehicle, filled with explosives, into a CRPF convoy on the Srinagar-Jammu national highway in Pulwama district on February 14.