Show host Bear Grylls and PM Modi channelled their adventurous side for the Discovery show, extensively shot in the rainforests of Uttarakhand, as they took an off-track journey across the national park. 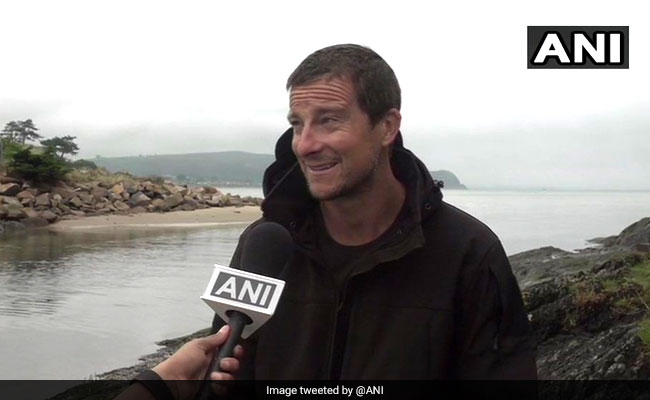 Show host Bear Grylls said the Prime Minister, as a world leader, is calm in a crisis.

Prime Minister Narendra Modi, in the middle of a crisis, was an example of calm and cheerfulness, said the host of Discovery channel's "Man vs Wild" show and adventure junkie Bear Grylls ahead of the premiere of his special episode with the Prime Minister.

In an exclusive interview to ANI, Mr Grylls said the Prime Minister, as a world leader, is calm in a crisis, as he braved all odds, including inclement weather, as they embarked on their journey through Jim Corbett National Park in Uttarakhand.

"I think often you see politicians behind a podium looking smart in a suit. But the wild is a great leveller, it doesn't care who you are.  It rewards commitment and courage, you got to work together," Mr Grylls said.

According to show host, PM Modi was calm through the adventure journey. 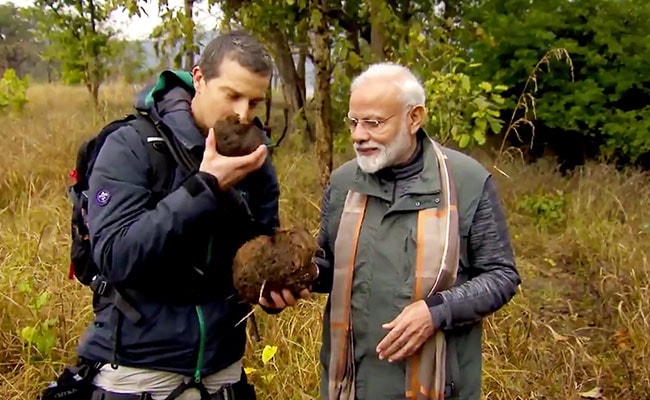 "We got hit by some really big stones and torrential rain whilst we were there. Our team, who was filming, was really on the edge, but the Prime Minister was just very calm and I saw that throughout our journey," he said.

"Whatever we were doing, he was very calm. That was cool to see. You never really know what someone is like until there's a crisis. It was good to be reminded that as a world leader, Prime Minister Modi is calm in a crisis," he said.

Mr Grylls and PM Modi channelled their adventurous side for the Discovery show, extensively shot in the rainforests of Uttarakhand, as they took an off-track journey across the national park.

Home to a large number of tigers, the national park is built over an extent of 520 square kilometres and is among the few tiger reserves in India that allows overnight stays in the lap of the national park. It also shelters rare species like Otters and the endemic fish eating crocodile, and is one of the most sought after destinations for the wildlife buffs.

Watch this exclusive sneak peek as renowned adventurer, @BearGrylls embarks on a journey with the leader of the world's largest democracy, PM @narendramodi. Tune in to #ManVSWild with Bear Grylls and PM Modi on 12 August, 9 PM. #PMModionDiscoveryhttps://t.co/YbQ7wfksDl

What stood out the most about PM Modi throughout the journey, Mr Grylls said, was the global leader's humility, as even through incessant rains, there was a "big smile" on his face.

"What shone bright for me was his humility. He was a very humble guy and even though there was pouring rain and his secret services were trying to get out umbrellas, he said "no I'm fine"," Mr Grylls said.

He further said that when they reached a river and then we reached a river. I made this raft out of reeds and a tarpaulin. I said I think we can get across the river using this, but the secret services were like ''we cannot put the Prime Minister in a little homemade raft''. But he (Modi) said he was fine and we''d do this together. He asked me to get in too, but the things started sinking. So it was me swimming and pushing him, he was soaking wet but there was a big smile on his face even through the rain. You learn about people in those moments," said a visibly-elated Grylls.

Bear Grylls in Wales(UK): Our team who was filming( Man vs Wild) was really on the edge, but the PM(Modi) was just very calm and I saw that throughout our journey. Whatever we were doing, he was very calm. That was cool to see...What shone bright for me was his humility pic.twitter.com/Fhf0ABEGQg

The BAFTA award-winning TV host went on to say that despite having to cross big overflowing rivers in unfavourable weather conditions, the Prime Minister was very considerate and trusting throughout the journey.

"I said to him in the beginning, it was my job to keep you safe from wild animals, bad weather and big rivers, which was true. He was very calm and considerate, very trusting of me and we just travelled together," he said.

"It was harder for his security team as they were carrying weapons briefcases and all that. The Prime Minister in the middle of it was an example of calm and cheerfulness," he opined.

Mr Grylls also said the episode brings out a side of the Prime Minister like never seen before.

People across 180 countries will get to see the unknown side of PM @narendramodi as he ventures into Indian wilderness to create awareness about animal conservation & environmental change. Catch Man Vs Wild with PM Modi @DiscoveryIN on August 12 @ 9 pm. #PMModionDiscoverypic.twitter.com/MW2E6aMleE

Last month, Mr Grylls had shared a 45-second promo of the special episode on Twitter, which broke the internet, as people got to see a new side to the Prime Minister.

In the snippet of the much-awaited episode, PM Modi is seen interacting with Mr Grylls, riding a dingy and putting together a spear.

"You are the most important man in India. my job is to protect you," he said in the video, covering the Prime Minister's shoulder with a jacket.

Man Vs Wild With Bear Grylls and Prime Minister Modi will premiere simultaneously on 12 Discovery channels in India on August 12 and will be showcased in as many as 180 countries.