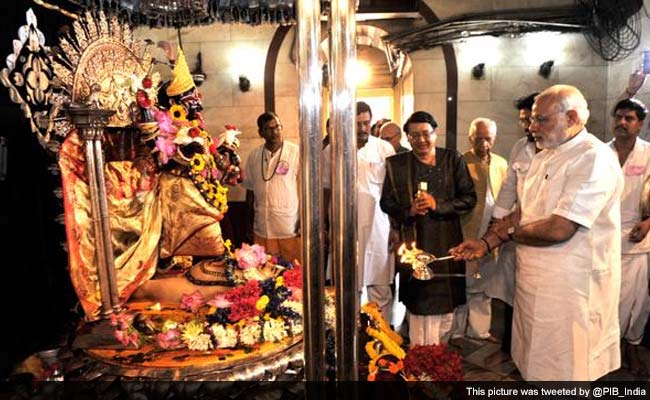 Mr Modi, who was accompanied by Governor KN Tripathi and union minister Babul Supriyo, became the first prime minister to visit the Kali temple located on the eastern bank of Hooghly river.

Mr Modi is on his maiden visit to the state since becoming the prime minister.

"Modi is the first prime minister to come here. Besides touching the feet of the idol and seeking her blessings, Modi also performed 'aarti'," said Kushal Chowdhury, a member of the temple's board of trustees.

The temple is dedicated to 'Bhavtarani', an aspect of Goddess Kali, and was built in 1855 by Rani Rashmoni, a philanthropist and a devotee of Kali.

The temple authorities gifted Mr Modi a handcrafted Ashoka pillar and a replica of Kali idol.

"Since his early days, Modi has kept his association with the Ramakrishna Mission and Ramakrishna Math. Coming here he was overawed with emotions. His visit here is an occasion of mutual joy and happiness," said a member of the mission.

Elaborate security arrangements were made for the prime minister's visit.

Swami Atmasthananda is undergoing treatment at the hospital since February 21.

Their camaraderie goes back to the early days of Mr Modi when he wanted to enlist in the mission as a volunteer but Swami Atmasthananda, who then was posted in mission's Rajkot centre in Gujarat, suggested Modi to look for an alternative career.
Comments
Belur MathRamakrishna MissionRamakrishna ParamhamsaNarendra ModiSwami AtmasthanandaKN TripathiBabul SupriyoModi West Bengal Visit