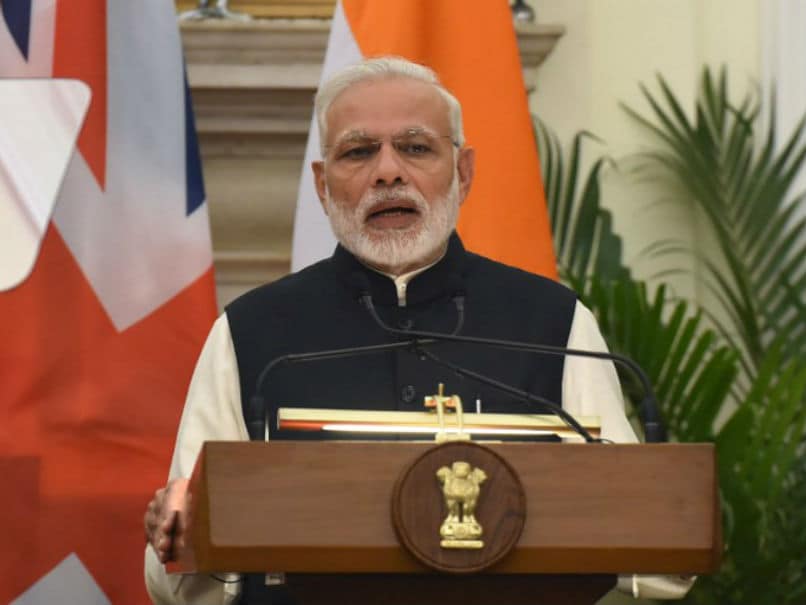 Prime Minister Narendra Modi today advocated the use of technology for speedy delivery of justice and assured CJI JS Khehar that the government will make all efforts to back his resolve to reduce pendency of cases.

He also asked startups to come up with innovations that could aid the judicial system to dispose of cases expeditiously.

"The government wants that the judicial system of our country makes full use of information and communication technology. This should be given priority," he said, noting, "This can help save a lot of time and money."

Addressing a function to mark 150 years of the Allahabad High Court, PM Modi said, "I assure the chief justice that government will back his 'sankalp' (resolve) to bring down the burden on the judiciary and reduce pendency of cases."

He also said video-conferencing should be used for deposition made in courts by undertrials, witnesses and officials to prevent wastage of time and money.

"So many precious hours of officials, which should have been spent doing administrative tasks, get used up in travelling to far-off places to appear in courts. This can be obviated through video-conferencing," he said.

The Prime Minister noted that security concerns associated with physical production of undertrials in courts could be addressed by use of video-conferencing.

Many unfortunate incidents have taken place in Uttar Pradesh during transportation of undertrials to courts but with Yogi Adityanath as chief minister, there may be a drop in such incidents, PM Modi remarked, evoking peals of laughter.

The PM recalled that during the 2014 Lok Sabha poll campaign he had said that he would abolish archaic laws if elected and the government has now done away with 1,200 redundant laws.

"It is in the interest of justice that the people of the country are liberated from this huge, complicated tangle of laws," he said, noting that he felt that there was an element of "pain" in the speech of Justice Khehar.

Quoting the address of the then president S Radhakrishnan at the centenary celebrations of the high court five decades back, PM Modi said every law must ensure justice and welfare of all, not just the rich and this principle remains relevant.

Mahatma Gandhi always emphasised the need of judging every action on the touchstone of how it would affect the poorest of the poor and this should be the intention behind every law made, the PM said.

During his address, he appealed to the judiciary, government officials and the people to make 2022, the 75th year of Independence, a target year to take the country to greater heights.

At the function, he paid tributes to the contributions of people with legal background, including the Mahatma and Jawaharlal Nehru, who had put the need for Independence in the mind and hearts of the people.

Earlier addressing the gathering, Justice Khehar raised the issue of pendency of cases in courts, including in the Supreme Court, and the shortage of judges, and said he was taking steps to reduce the burden on the judiciary.

He asked the judges to consider sitting in courts for five days during vacation to clear at least 10 cases each day and bring down the pendency.

"This way thousands of small matters like matrimonial disputes and mediation cases can be settled and arrears of cases brought down" he said and referred to a system of court management under which pendency of cases in Malaysia had been brought down to one-fifth.

He added that three constitution benches will sit during this summer vacation to help reduce the arrears in the apex court.

Union Law Minister Ravi Shankar Prasad told the gathering the government is committed to complete independence of the judiciary.

He asked lawyers to volunteer to help the poor get access to justice and highlighted the steps being taken by the Centre to reduce pendency, including minimising litigation by the State and meeting the long-standing demand of filling up vacant posts of judges.

"The Prime Minister has said that the government is committed to independence of the judiciary and that it should be complete," he said.

He said that to reduce arrears in courts, the government is setting up 'sahayata kendras' (facilitation centres) that would be devoted to speedy disposal of such cases as may have been pending for 10 years or more.

"A pilot project for legal aid was being launched for Uttar Pradesh and Bihar," the minister said.

He also said that the process is on for finalising a national litigation policy.

"Already, I have at the direction of the Prime Minister written to chief ministers of states and my colleagues in the Union Council of Ministers to ensure that the number of cases filed by the government is reduced as far as possible.

"There has been a long-standing demand for filling up of vacant posts of judges. That too will be taken care of," Mr Prasad said.

Promoted
Listen to the latest songs, only on JioSaavn.com
There are nearly 5,000 vacancies in the subordinate judiciary and 2.7 crore cases are pending therein. While 38.7 lakh cases are pending in high courts.