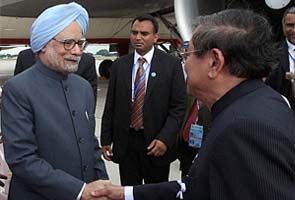 Phnom Penh: Prime Minister Manmohan Singh arrived in the Cambodian capital Phnom Penh today to attend the ASEAN and East Asia Summits which will provide an opportunity for India to enhance its economic cooperation with the region amid lingering financial crisis in the western world.

The PM's tour is for three days during which he is also expected to have a meeting with Chinese Premier Wen Jiabao and some other world leaders on the sidelines of the ASEAN and EAS Summits.

Before his arrival here, PM said in a statement that India's partnership with 10-nation ASEAN is an important component of the 'Look East Policy'.

"This year marks the 20th anniversary of our dialogue partnership and 10th anniversary of Summit-level engagement with ASEAN," he said, adding India is celebrating this milestone by hosting a special commemorative summit in New Delhi next month.

Noting that India's engagement with ASEAN has become strong, comprehensive and multi-faceted over the last decade, Singh said, "The Summit in Phnom Penh will give us an opportunity to preview and prepare an ambitious agenda for the Summit next month to take the India-ASEAN relationship to a new level."

About the 18-nation EAS, he described it as the "foremost forum for promoting peace, stability and prosperity" in the Asia-Pacific region.

"This year, we are preparing to launch the negotiations for a Regional Comprehensive Economic Partnership among ASEAN and its FTA partners, including India. This is a giant step towards creation of an economic community in the region," he said.

This forum, PM said, also serves as a useful platform for enhancing cooperation in the region and discussing regional security issues.

During his Cambodia visit, Singh is expected to pitch for increased trade and investment between India and ASEAN against the backdrop of economic crisis hitting Europe and other parts of the western world.
India and ASEAN are holding negotiations on a Free Trade Agreement in Services and Investment and are keen to conclude these before the Summit on November 19. The two sides have already signed FTA in Goods.

India's trade with ASEAN was over USD 50 billion in 2011-12 after a 30 per cent jump over the previous financial year.

The Prime Minister is also expected to update the ASEAN leaders on the progress made on revival of the centre of learning at Nalanda, Bihar.

US President Barack Obama will also be in Phnom Penh but it is not yet clear whether there will be a meeting between Singh and him because of paucity of time.

During the last India-ASEAN Summit held in Bali in Indonesia, PM had cited the global economic downturn to push for conclusion of a "commercially-meaningful" Services and Investment pact by March this year to create a positive atmosphere for implementation of the Comprehensive Economic Cooperation Agreement.

He had also highlighted the need for greater connectivity and cooperation on security issues, including maritime security, counter-terrorism, training, exercises and disaster management.