The last stop of the campaign of the Ram Nath Kovind was Gandhinagar for a meeting with BJP MLAs and parliamentarians from Gujarat. 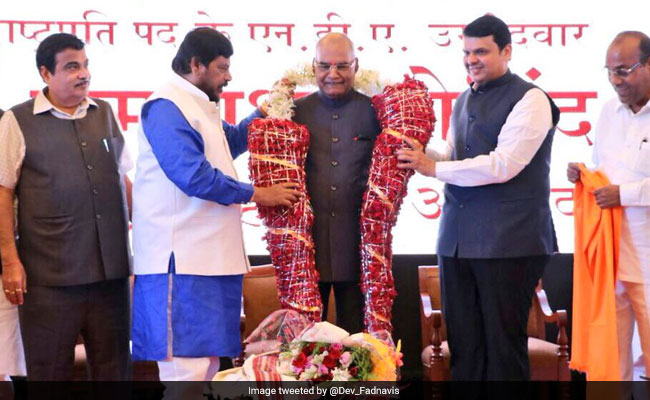 Mumbai/Panaji/Gandhinagar: NDA candidate Ram Nath Kovind wrapped up his nationwide tour on Saturday to seek support for the July 17 Presidential polls where he is nominated against the Congress-led combined opposition nominee Meira Kumar.

The last stop of the campaign of the 71-year-old lawyer- turned-politician, who is locked in a straight fight with the former Lok Sabha Speaker in what is billed as a 'Dalit verus Dalit' contest, was Gandhinagar for a meeting with BJP MLAs and parliamentarians from Gujarat.

Mr Kovind started his campaign from Mumbai and followed it up with a visit to Panaji and Gandhinagar. Union minister Nitin Gadkari said was the last day of the nationwide tour undertaken by Mr Kovind during which he visited 26 states.

Counting of votes to elect the 14th President of India who will succeed Pranab Mukherjee is scheduled to be taken up on July 20.

Mr Gadkari claimed that Mr Kovind will win with more than 70 per cent of the voting share. Several non-NDA parties like the JD(U), the BJD, the TRS and both the factions of the AIADMK have pledged their support to Mr Kovind.

Mr Kovind, who was Governor of Bihar before he was chosen as the NDA candidate, kickstarted his campaign from his home state, Uttar Pradesh on June 25.

Mr Kovind spoke to Shiv Sena chief Uddhav Thackeray over phone and thanked him for supporting his candidature. A visit to Thackeray's residence 'Matoshree' in suburban Bandra was not in Mr Kovind's itinerary which had raised eyebrows.

However, he made a phone call to Thackeray and thanked him for supporting his candidature, Shiv Sena sources said. Significantly, Pranab Mukherjee and Pratibha Patil, as presidential candidates of the UPA, had visited the then Shiv Sena supremo late Bal Thackeray at 'Matoshree' as the Sena had broken ranks with the NDA in the past two elections for the highest constitutional office.

"We all have the duty to preserve the highest importance of the Constitution of India. I would assure of equal justice to all, avoiding discrimination based on caste, religion, sect, gender and region," Mr Kovind said. He said there should be comprehensive growth of all the states of the country where there is equal justice for all.

"My preference would be to ensure addressing the aspirations of the youth of the country, promotion and modernisation of education. We will do our utmost to preserve the prestige of the post of the President," he added. Mr Kovind held a meeting with elected representatives of the BJP, the Shiv Sena and other NDA allies at the Garware Club in south Mumbai.

The members of the Lok Sabha, the Rajya Sabha and state assemblies form the electoral college and currently the total strength is fixed at 10,98,882 votes. The candidate, who crosses the halfway-mark of 5,49,442 votes, is declared as the winner.

While the value of the vote of an MP is fixed at 708, that of an MLA varies depending upon the state he or she represents. For example, an Uttar Pradesh MLA contributes 208 votes in the presidential election, his counterpart from Sikkim adds up only 7 votes.

"I am sure when results will be announced, he will win with more than 70 per cent votes," Mr Gadkari told reporters in Panaji after Mr Kovind held a meeting with the legislators supporting the Manohar Parrikar-led government.

Promoted
Listen to the latest songs, only on JioSaavn.com
During his brief visit to Goa last evening, Mr Kovind accompanied by Mr Gadkari met the legislators at a resort in Vasco, 35 km from Panaji. "He met MLAs from Maharashtra and Goa who are part of the NDA. Everyone has assured support to Kovind during the presidential election," Mr Gadkari said before Mr Kovind headed to Gujarat.

Mr Gadkari said during the interaction, the presidential candidate told the legislators that he will uphold the principles laid down in the Indian Constitution.

For detailed coverage on President elections, follow this link.