On the demands of the family, Prashant Sharma had visited the post-mortem house on Wednesday, where the body of Sonu Singh, 35, who was killed by armed men on Tuesday night, was brought. 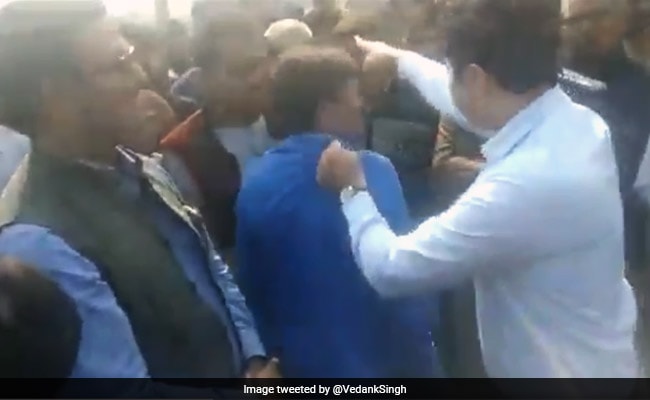 On the demands of the family, Mr Sharma had visited the post-mortem house on Wednesday, where the body of Sonu Singh, 35, who was killed by armed men on Tuesday night, was brought.

In the video clip which has gone viral, the District Magistrate is seen almost dragging a cousin of the  Sonu Singh. Locals had expressed anguish over the administration's alleged insensitivity.

The state government has removed Prashant Sharma and put him in waiting, a government spokesman said on Thursday.

Tagging the District Magistrate, Amethi MP, Smriti Irani had tweeted "We should be modest and sensitive, this should be our effort. We are public servants, not rulers".

Sonu Singh owned a brick kiln and his father Shivnayak Singh is a senior leader of the ruling BJP in the district.

In the video clip, the District Magistrate is reportedly heard telling Sonu Singh's family members that there is no country in the world where killings do not take place and the administration is not god that it can prevent incidents of crime from taking place.

"What would you have done had you been in our place? Would you have stopped the killing from taking place," he is heard asking the crowd.

When Sunil Singh points out that a Dial 100 police team was in the vicinity and the crime could have prevented by acting promptly, the District Magistrate is seen almost dragging him holding his shirt and asking him if he can make out if anyone in the crowd has a gun.

When the people assembled to object to his behaviour, the District Magistrate is also seen reprimanding them.

Telling the crowd that he is the senior-most officer in the district, Mr Sharma is heard speaking about his problems and the sensitive times in which he and his officers have been working round-the-clock in the video.

His family has named five persons from Gauriganj, all of whom have a criminal record, for their alleged involvement in the incident.