There Will Be Anarchy If There Is No PM Modi: Prakash Javadekar

Referring to the coalition rules of IK Gujral, Chandrashekhar and HD Deve Gowda in the past, he said people suffered during the days of those "weak governments" 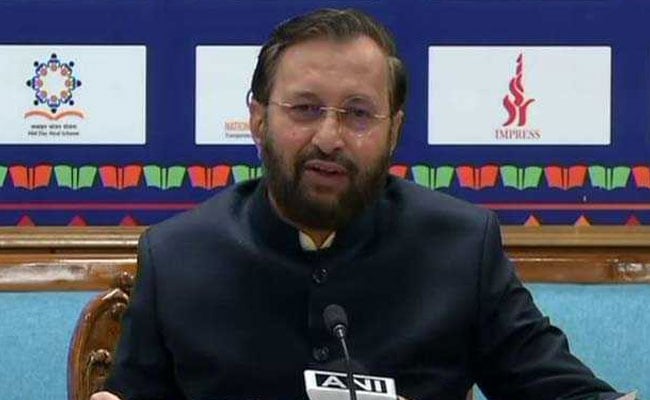 Union Minister Prakash Javadekar on Sunday said there was no alternative to Prime Minister Narendra Modi and that there would be "anarchy" in his absence.

Taking a dig at the opposition rally organised by Trinamool Congress (TMC) chief Mamata Banerjee in Kolkata on Saturday, Mr Javadekar said the forthcoming Lok Sabha polls would be fought on issues like -- whether people want a "mazboot" (strong) or a "majboor" (weak) government.

"Looking at yesterday's rally in Kolkata, where all the opposition parties came together, it was evident that all these parties want to drive out Modi, but who is the alternative?

"They cannot present an alternative, so the condition in the country is like if there is no Modi, there will be anarchy," the Union human resource development minister told reporters here.

Referring to the coalition rules of IK Gujral, Chandrashekhar and HD Deve Gowda in the past, he said people suffered during the days of those "weak governments", while on the other hand, the public had seen the benefits of a "strong and policy-driven" government led by PM Modi.

"Therefore, people will choose between a mazboot and a majboor government," he added.

Mr Javadekar said the Kolkata rally showed the nervousness of the opposition parties as they did not form any committee to draft a manifesto or a common minimum programme, but formed a panel on electronic voting machines (EVMs).

"It shows that they are already looking for an excuse for their possible defeat and it shows their nervousness," he said.

The Congress and the other opposition parties wanted a "majboor" government so that they could indulge in corruption, Mr Javadekar alleged.

"Whereas people want a mazboot government like the Modi government, which is eliminating corruption in the system and not sparing those involved in corruption," he said.

Mr Javadekar expressed confidence that the ruling Bharatiya Janata Party (BJP) would get more seats in the 2019 Lok Sabha polls, as compared to 2014, and that its vote share would also increase.

The BJP had won 282 of the total 543 seats in the last general election.

"When I say the BJP will surpass the 282 number in the upcoming Lok Sabha, the reason for that is the party's tally in West Bengal, Odisha and the north-eastern states will go up," Mr Javadekar said.

The BJP had launched several campaigns ahead of the polls to reach out to people, he pointed out.

"We are going to run a campaign -- ''mera ghar BJP ka ghar'' -- in the coming days, under which those who support the party and want to vote for it will hoist the party flag atop their houses," the Union minister said.

He added that in the next three months, the BJP would reach out to each and every booth in the country, showcase the work done by the National Democratic Alliance (NDA) government in the last four-and-a-half years and expose the Opposition''s "hollow politics".

Asked about the 10 per cent general category quota and its implementation, Javadekar said his department had directed all the educational institutes, including the IITs, IIMs and the central universities, to implement the quota from the coming academic year.

"A similar order has been sent to all the state governments for the implementation of the quota. We have also given a formula on how to implement the 10 per cent reservation without (affecting) the other categories'' quota," he added.