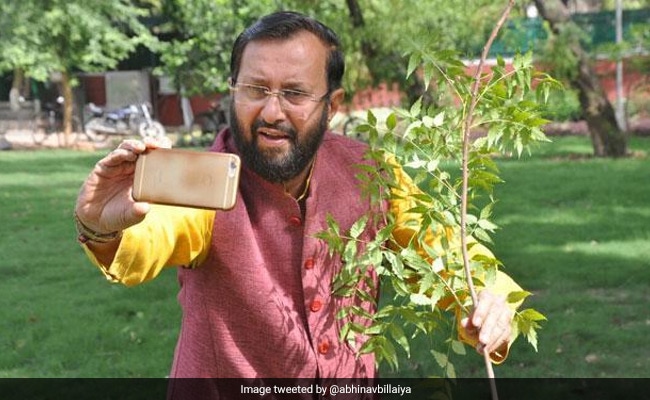 Union Environment Minister Prakash Javadekar launched a campaign asking people to take selfies with a sapling on World Environment Day today. In a photo tweeted by Abhinav Billaiya, an expert with the National Agriculture Market (eNAM), Mr Javadekar is seen posing beside a sapling with a cellphone in hand, trying to take a selfie.

Union Minister @PrakashJavdekar along with renowned cricketer @therealkapildev and bollywood actor @bindasbhidu plant sapling in the premises of Paryavaran Bhawan in New Delhi#WorldEnvironmentDay#SelfieWithSaplingpic.twitter.com/ojZLPTgeSK

The Union Minister also retweeted a video montage that Prime Minister Narendra Modi had posted on the occasion. The video shows multiple clips from PM Modi's visit to the Kedarnath shrine in the mountains of Uttarakhand and thematic shots of plants on the topic World Environment Day.

Our Planet and Environment is something we all cherish greatly. Today on #WorldEnvironmentDay, we reiterate our commitment to ensure a cleaner planet.

Living in harmony with nature will lead to a better future. pic.twitter.com/3V7yLD3d8U

"Our Planet and Environment is something we all cherish greatly. Today on #WorldEnvironmentDay, we reiterate our commitment to ensure a cleaner planet. Living in harmony with nature will lead to a better future," PM Modi tweeted.

In a series of tweets, Mr Javadekar proposed a discussion on air pollution and asked people to give their views on how best they can work to reduce air pollution and prevent runaway rise in temperature due to global warming.

In Mumbai, inspired by Afroz Shah, the man behind the clean-up of the city's Versova beach, residents are organising clean-up campaigns on other beaches such as Dadar.

The designation of 5 June as World Environment Day comes from the United Nations. "...Since it began in 1974, it has grown to become a global platform for public outreach that is widely celebrated in more than 100 countries," the UN says on its website.

Each World Environment Day is organised around a theme that focuses attention on a particularly pressing environmental concern. The theme for 2019, "Beat Air Pollution," is a call to action call to combat this global crisis.

"Chosen by this year's host, China, this year's topic invites us all to consider how we can change our everyday lives to reduce the amount of air pollution we produce, and thwart its contribution to global warming and its effects on our own health," the UN says.