The provision of a "dummy candidate" has been made to ensure that a party doesn't lose its representation if the official nominee's candidature is cancelled or invalid. 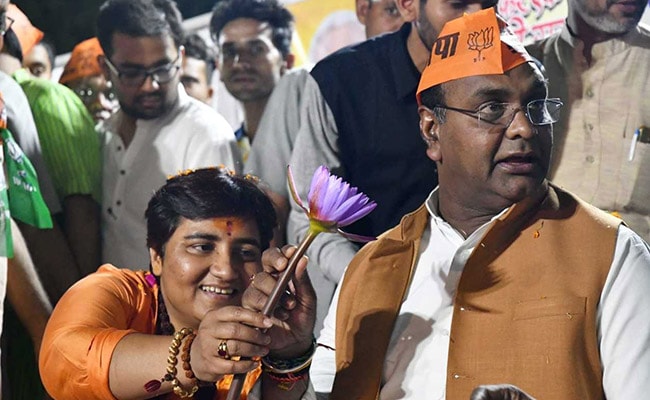 Pragya Singh Thakur was expected to formally file her candidature on Tuesday.

A day after police registered a complaint against Pragya Singh Thakur - the BJP's pick for Bhopal - over her remarks on the Babri Masjid demolition in 1992, outgoing parliamentarian Alok Sanjar today filed his nomination from the seat as a "dummy candidate", news agency PTI reported.

The provision of a "dummy candidate" has been made to ensure that a party doesn't lose its representation from a seat in the event of the official nominee's candidature getting cancelled or invalid. Mr Sanjar said he had filed the nomination papers on the party leadership's directive, and expressed confidence over Pragya Thakur winning the election against Congress candidate Digvijaya Singh by a "huge margin".

The Election Commission had sent a show-cause notice to 49-year-old Pragya Thakur, an accused in the 2008 Malegaon blasts case, after she boasted about her role in demolishing the 16th century mosque in Ayodhya. On Monday, it directed the police to file a complaint against her.

"A grand Ram temple will be built. I had climbed atop the (Babri Masjid) structure to demolish it, and I am very proud of that. God gave me the strength to wipe this blot off the face of this country," she was quoted as saying in a televised interview.

Pragya Thakur - who is out on bail - was expected to formally file her papers on Tuesday, but the complaint was registered against her just the night before. She was booked under Section 188 (disobeying an order issued by a public servant) of the Indian Penal Code.

The BJP politician has been kicking up a storm with controversial remarks ever since her candidature was announced from Bhopal last week. A few days ago, she claimed that 26/11 hero Hemant Karkare was killed by terrorists because she had put a "curse" on him for investigating her involvement in the Malegaon blasts case. An uproar followed, forcing her to retract her remarks.

The father of a Malegaon blasts victim has filed a court plea against allowing Pragya Thakur to contest the elections.