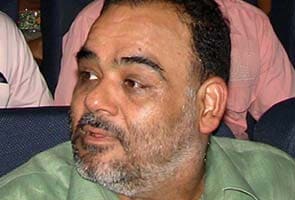 Dehradun: Uttarakhand Chief Minister Vijay Bahuguna today hinted that the government might remove state's Minority Commission chairman Sukhdev Singh Namdhari who was present during the shootout at a farmhouse in Delhi in which liquor baron Ponty Chaddha and his brother were killed.

"His (Namdhari's) tenure is yet to be over. But the state administration will act and find a way out to remove him," the Chief Minister said in Dehradun today.

Namdhari was appointed chairman of the Uttarakhand Minority Commission during the BJP rule in 2010.

His association with Chaddha came under scanner when it came to light that he was present along with his personal security officer (PSO) Sachin Tyagi, an Uttarakhand Police constable, at the time of the shootout at the farmhouse in which Ponty Chaddha and his brother Hardeep were killed.

The name of Namdhari's PSO has also cropped up in connection with the incident prompting state DGP Satyavrat Bansal to send a team to the national capital to ascertain facts about his alleged role in the incident.

Tyagi allegedly fired a few shots during the shootout to protect himself and Namdhari.

A police team headed by Inspector Pramod Shah had been sent to Delhi to find out facts about alleged role of Tyagi, the DGP said.

He said some cases were lodged against Namdhari in Uttarakhand.

The DGP, however, added he could not say anything about the type of cases and in which part of the state these were registered.
Comments
Ponty Chadha