Trinamool criticises BJP posters and photos for being insensitive to Bengali sensibilities. 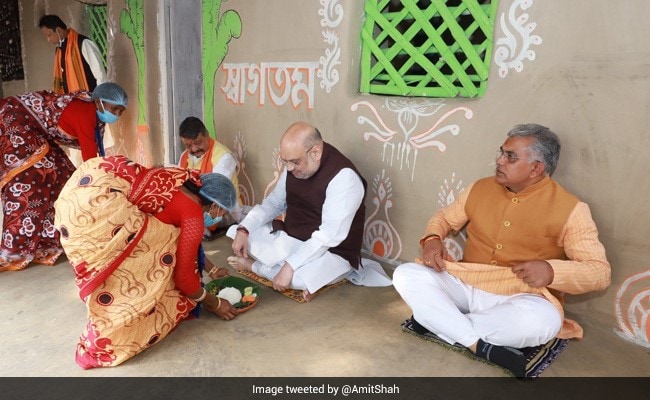 Amit Shah is on a two-day visit to West Bengal ahead of the state assembly polls.

In a bunch of tweets, Trinamool's official Twitter handle and those of some party leaders have attacked and mocked Mr Shah over the past few days, focusing on his political gestures and campaign material during the high-decibel visit on December 19 and 20, besides making use of critical news reports.

One of the tweets, posted by the party's official account, taunted him over his lunch on Saturday at a farmer's house in Belijuri, West Midnapore. The only comment in the tweet, along with a photo of him eating lunch, was "Oops!" and a "surprise" emoji.

What made the tweet biting was another tweet quoted by it. This one, posted by Prime Minister Narendra Modi's personal handle in April 2014, said: "Congress leaders specialise in poverty tourism. With cameras, they go to villages, sit with the poor, eat their food & get pictures clicked."

Another post by the TMC handle focused on a poster featuring Mr Shah on top, a local BJP leader at the bottom, and a sketch of Gurudev Rabindranath Tagore placed in between.

Using #BJPInsultsTagore, the December 18 tweet slammed the BJP leader and the party's state unit for allegedly disrespecting the venerated philosopher-poet by placing the Union Minister's picture above. "Extremely shameful to see that you have placed yourself above Gurudeb! People of Bengal will NEVER forgive this!" it said.

The same poster came in for criticism from Trinamool Secretary General Partha Chatterjee, who called Mr Shah "pompous" and an "outsider" disconnected with "the culture of Bengal".

Mr @AmitShah, your pompous nature and disconnect with the culture of Bengal has surfaced once again!

You are so caught up in election fever that respecting our leaders has clearly taken a backseat. This is exactly why you will remain 'outsiders' to us!#BJPInsultsTagorepic.twitter.com/RCNgTdsnBL

In another Tweet, Mr Chatterjee cited a news report on the BJP's alleged manipulation of public opinion during last year's nationwide anti-citizenship law agitation. He accused the party of misusing its power to manipulate public opinion. It tagged PM Modi's handle to ask why he, "instead of wasting money to garner support for CAA", he didn't focus on burning issues like recession and unemployment.

Mr Shah's West Bengal visit comes months ahead of the state assembly polls and is likely to become a recurring affair till then. On Saturday, in Medinipur, a number of Trinamool leaders, including Suvendu Adhikari, joined the BJP in his presence.

The BJP is investing unprecedented amounts of time and resources in the state ahead of the polls, looking to replace the Mamata Banerjee-led Trinamool Congress from power.