Earlier today, a Delhi court had sentenced Jaya Jaitley and two others to 4 years in prison for corruption in a 2000-01 case related to a purported defence deal. The court had also imposed a fine of Rs 1 lakh each on all three convicts and had directed them to surrender before it by 5 pm today. 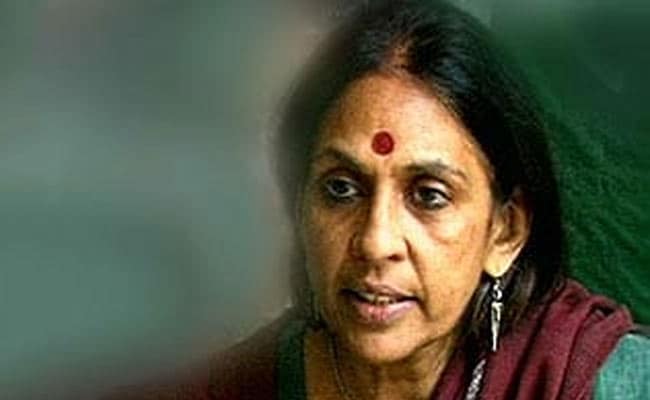 The Delhi High Court has put on hold the 4-year jail term given to former Samata Party chief Jaya Jaitley in a corruption case related to a purported defence deal, a lawyer said. The high court has sought CBI's response on Jaya Jaitley's appeal challenging her conviction and sentence in the case.

Earlier today, a Delhi court had sentenced Jaya Jaitley and two others to 4 years in prison for corruption in a 2000-01 case related to a purported defence deal.

The court, in an in-camera proceeding, also imposed a fine of Rs 1 lakh each on all three convicts and had directed them to surrender before it by 5 pm today.

The three were held guilty of corruption and criminal conspiracy in the purported purchase of hand-held thermal imagers.

While convicting the three accused, the court had held that they, along with Surender Kumar Surekha (who later turned approver), were party to a criminal conspiracy that took place between December 2000 and January 2001 at Delhi.

The illegal money was accepted for obtaining supply orders for hand held thermal imagers from the army.

All the three accused - Jaya Jaitley, Gopal Pacherwal and SP Murgai - were convicted of the offence of conspiracy (Section 120-B IPC read with Section 9 (Taking gratification, for exercise of personal influence with public servant) of Prevention of Corruption (PC) Act.

The court held it is "proved beyond doubt that in the meeting in the hotel room on December 25, 2000 Surekha and Murgai assured their assistance to Samuel in procuring letter of evaluation for the product of his company from the Ministry of Defence and also to arrange a meeting between him and accused Jaya Jaitley who would provide political cover to them in this regard."

"It was agreed that Samuel would pay Rs 1 lakh each to Surekha and Murgai and Rs 2 lakh to Jaitley," the court noted.

"Thus there had been an agreement between them to obtain the evaluation letter for the concerned product by illegal means i.e. by resort to corruption and personal influence upon the concerned officials," it said, adding that "Accordingly, Pacherwal arranged the said meeting for December 28, 2000. He too was present in the said meeting in the room of Jaitly along with Surekha, Samuel and Murgai."

The court further said: "In that meeting, which took place in the official residence of the then Union Minister for Defence, George Fernandes, Samuel was introduced to Jaitley as a businessman whose company intends to enter the market of defence procurement."

"Samuel offered the sum of Rs 2 lakh to Jaitly who instructed him to handover the money to Pacherwal and accordingly, the money was received by accused Pacherwal knowing that it was bribe money. In lieu thereof, Jaitley assured Samuel that in case the product of his company is not considered, she would intervene by making a request to 'Sahib' (purportedly the Defence Minister Mr. George Fernandes) to send a word to the concerned officer in this regard."

The court said both the accused, Gopal Pacherwal and Jaya Jaitley, are also guilty of the offence of conspiracy.

"Jaitley received a sum of Rs 2 lakhs through Pacherwal from Samuel as a motive/reward for agreeing to accomplish the task given to her i.e. to exert personal influence upon the concerned Ministers/ Officers in pushing the product of the company of Samuel into the Indian Army," it said.

Similarly, SP Murgai received Rs 20,000 from Samuel on January 4, 2000 in lieu of the assistance rendered by him in arranging a meeting with Jaya Jaitley and securing letter of evaluation for the product of the company of by exercise of personal influence upon the concerned officers, the court noted.

"Therefore, both of them have committed offence envisaged under Section 9 of the PC Act," it said.