The epicenter of the powerful 5.8-magnitude earthquake, which occurred at around 4 pm on Tuesday at a depth of only 10 kilometers, was near Mirpur city in the Pakistan-occupied Kashmir or PoK, roughly 20 kilometers north of Jhelum river in Punjab, according to the US Geological Survey. 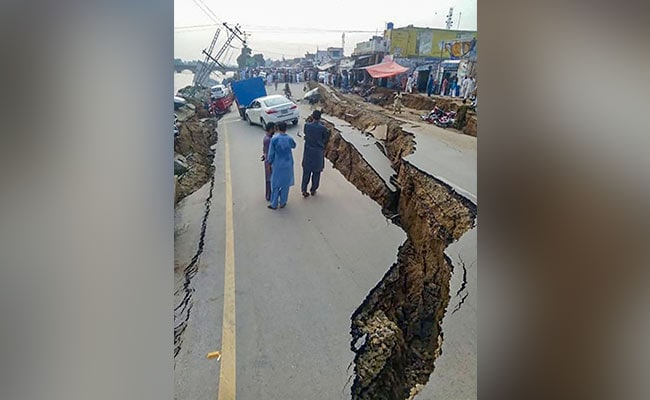 The number of deaths in the devastating earthquake that rattled Pakistan-occupied Kashmir and several places in Pakistan rose to 37 today as authorities stepped up relief efforts.

The epicenter of the powerful 5.8-magnitude earthquake, which occurred at around 4 pm on Tuesday at a depth of only 10 kilometers, was near Mirpur city in the Pakistan-occupied Kashmir or PoK, roughly 20 kilometers north of Jhelum river in Punjab, according to the US Geological Survey.

The earthquake resurrected the haunting memories of a monster tremor that had wrecked the region 14 years ago.

In Pakistan-occupied Kashmir, eleven deaths have been reported in Jatlan and nine in Mirpur alone. Other people died in the areas located between Mirpur and Jari Kas, PoK's Disaster Management Authority Secretary Shahid Mohyiddin said.

The areas in PoK that were worst hit were Mirpur city, a small town Jatlan and two villages Manda and Afzalpur, where buildings and homes collapsed, trees were uprooted and cracks appeared on roads large enough to swallow cars.

"The NDMA is already providing medicines, food items and tents, which were in its stock in the affected areas, to the victims," he added.

Lt Gen Afzal said that 452 people were injured, including 160 are in serious condition and 450 houses were also damaged.

Special Assistant of Pakistan's PM on Information Firdous Ashiq Awan said that government would compensate the families of dead and injured and also help them to rebuild damaged houses. "An initial assessment is being done and soon a relief package will be announced by the government of Pakistan," she said.

Chaudhry Mohammad Saeed, a senior official in PoK told Pakistani newspaper Dawn that a state of emergency had been declared in all public and private hospitals of the town.

A breach in the Upper Jhelum Canal caused by the earthquake flooded a number of villages along the Jatlan Road in PoK. The earthquake also damaged two pedestrian bridges over the canal, making it difficult for the locals to cross over, the report said.

Pakistan was also hit by a 7.6-magnitude quake on October 8, 2005, that killed nearly 90,000 people in PoK and Khyber Pakhtunkhwa.