During his visit, Prime Minister Narendra Modi interacted with the workers engaged at the site and enquired about their well-being. 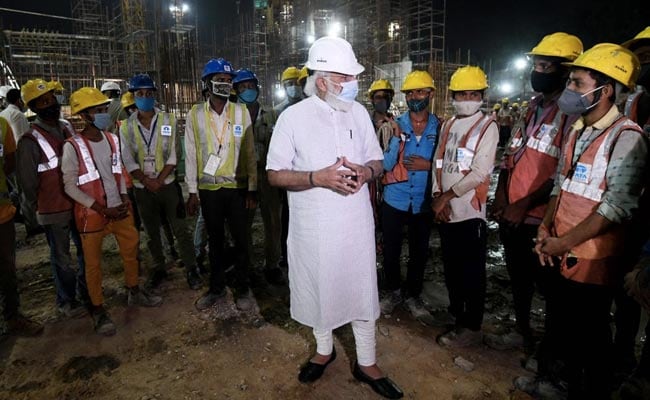 During his surprise visit to the construction site of the new Parliament building last night, Prime Minister Narendra Modi instructed that a digital archive of the project workers must be set up once work is completed.

He instructed that this digital archive must mention the workers' personal details -- name, place they belong to, their picture and their contribution to the construction work. He said the workers should also be given a certificate regarding their role and participation in this endeavour, said a government release.

The inspection visit came shortly after the Prime Minister's three-day trip to the US, where he attended a meeting of the Quad grouping and also addressed the United Nations General Assembly, besides holding bilateral meetings.

During his visit, the Prime Minister interacted with the workers engaged at the site and enquired about their well-being. He stressed that they were engaged in a pious and historic work.

The Prime Minister also directed that it must be ensured that all workers at the site are fully vaccinated against Covid and asked officials to ensure monthly health check-ups of all workers.

The Prime Minister spent over an hour at the site. Visuals show him wearing a protective helmet as he takes a look at various locations at the site. This was his first visit to the site of the new Parliament building.

The building is part of the Central Vista project, over which the government has come under criticism. Opposition parties led by the Congress have questioned the expenditure on the redevelopment plan and asked the government to spend on stepping up medical infrastructure in the country in the wake of the pandemic.