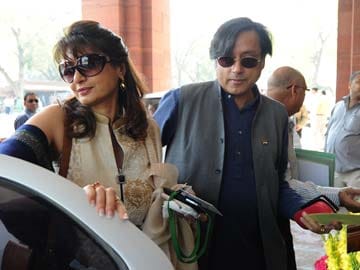 "I am deeply saddened at your loss. May God give you strength in this hour of grief," Dr Singh told Mr Tharoor. Mrs Tharoor, who was upset over an alleged extra-marital affair between her husband and a Pakistani journalist Mehr Tarar, was found dead in the room of a five-star hotel in Delhi. (Condolences pour in on Twitter) | (Mehr Tarar 'shocked' at Sunanda P Tharoor's death)

Promoted
Listen to the latest songs, only on JioSaavn.com
Police said they did not suspect any foul play in her death, adding it may be a case of suicide. (Read: Sunanda Pushkar Tharoor found dead - sequence of events)

The body of 52-year-old Sunanda P Tharoor, a woman entrepreneur who married Mr Tharoor in August 2010, was found in mysterious circumstances at the luxury Leela Palace hotel in South Delhi. (Read)