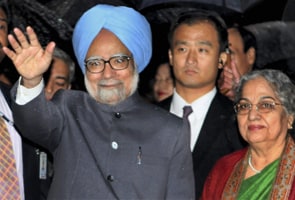 Tokyo: With Japan playing hard ball in the negotiations on the civil nuclear deal, Prime Minister Manmohan Singh on Monday said he would not "force" it on Tokyo as he recognises its sensitivity on the subject.

However, Singh, who is here on a two-day visit, said he would like Japanese firms to participate in expansion of India's nuclear industry.

"We would hope that Japan will be India's partner in expansion of its civil nuclear industry for peaceful purposes. But I do recognise the sensitivity of the subject in Japan and will not therefore force the issue," he told a business luncheon meeting here.

Singh made the comments while responding to a question about the next steps after the completion of a Comprehensive Economic Partnership Agreement (CEPA) between the two countries.

His comments come in the backdrop of Japan insisting that the proposed agreement on a civil nuclear deal should have a provision under which the cooperation would be called off if India were to test a nuclear weapon.

The two countries have already held two rounds of negotiations on the proposed agreement and the Indian side has indicated that this condition could be accommodated through proper wording in the pact. (Read: A Japanese twist to the nuclear deal)

Japan is the only country to have faced a nuclear attack and is immensely sensitive to the issue, particularly considering that India is not an NPT signatory.

Promoted
Listen to the latest songs, only on JioSaavn.com
Observing that with India's rapid economic growth, the demand for energy has been rising rapidly, Singh told the business leaders that cooperation between the two countries in this area will "enable Japanese companies to participate in India's ambitious nuclear energy programme."

The Prime Minister said Japan, as a global leader in energy efficienttechnologies, can play a significant role in helping India meet itsenergy needs in an environment-friendly manner.

After the Nuclear Suppliers Group gave a one-time waiver to India toconduct trade in peaceful atomic field in 2008, India has alreadysigned civil nuclear agreements with eight countries -- the US, France,Russia, Canada, Kazakhstan, Argentina, Namibia and Mongolia.

Japan was among the countries which supported the waiver for India despite having reservations over India not joining NPT.

Japanese companies are keen to participate in India's expanding nuclearindustry which is expected to be worth several billion dollars in thenext few years.

Ahead of his visit here, the Prime Minister said Indiaoffers hugeopportunities in the nuclear sector and Japanesecompanies should become"partners," given their advanced capabilities in this area.

Singh said the proposed pact would be a win-win proposition for boththe countries besides helping in the global efforts to combat climatechange.

"Developing countries like India seek new energy sources to sustainhigh rates of economic growth. We see nuclear energy as a vitalcomponent of our global energy mix," Singh told some Japanesejournalists in Delhi ahead of his visit.

He said India was aware of the advanced capabilities of Japanese firmsin the nuclear field and the important role they play in the globalsupply chain.

Referring to the proposed nuclear agreement with Japan, he expressedconfidence that it would be completed but made it clear that there areno deadlines for concluding these negotiations.

When pointed out that Japan was putting the condition that it willannul the nuclear cooperation if India goes for a nuclear test andwhether it was agreeable to India, Singh refused to comment on specificdetails as the negotiations are still underway.

He, however, said both countries would benefit from an agreement thatprovides a long-term and stable basis of cooperation in the peacefuluses of nuclear energy.

This, he said, will contribute towards India's energy securityrequirements and will also help in the global efforts to combat climatechange.