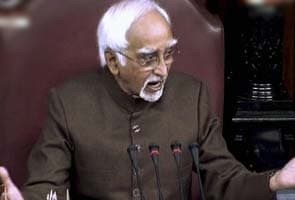 "You are not seen here after 12 pm... What kind of House is this? You have to decide what has to be done on this," she said.

Mr Ansari was visibly upset by her acrimonious remarks, three of which were expunged or deleted from parliamentary records in the evening.

"I am upset, it will be difficult to work in such a situation," Mr Ansari said according to leaders of political parties who met with him, according to the Press Trust of India.

Adding to the discomfort of the government is that Mayawati and her party provide external support to the vulnerable ruling coalition, which is in a minority.

Mayawati had described her criticism of Mr Ansari as "a tough first step" to alert the government to more serious consequences if it does not urgently push through a law to reserve promotions in government jobs for Dalits and tribals.

Mr Ansari had observed on Tuesday that the "Chair of the House is forced to watch helplessly" as MPs shout and disrupt proceedings.

It is parliamentary tradition that the Chair is never questioned by a member on how it conducts the House.

The Rajya Sabha has been paralysed this week largely over the issue of a discussion on whether promotions in government jobs should be reserved for Dalits and tribals.

Mayawati insists the proposal must be exigently discussed and introduced as law; her rival from Uttar Pradesh, Mulayam Singh Yadav, aggressively disagrees. His MPs have threatened to disrupt the Rajya Sabha every day, if needed, to prevent a debate on the "quota bill."

Mr Yadav disapproved of the BSP chief's attack on Mr Ansari. "Whether it is Rajya Sabha or Lok Sabha, there should be no comment against the respect of the Chair," he said on Wednesday.

While the proposal would be welcomed by Mayawati's vote bank, it's likely to cause resentment among the backward caste and Muslim voters of Uttar Pradesh who have traditionally supported Mr Yadav's Samajwadi Party.

Promoted
Listen to the latest songs, only on JioSaavn.com
Last week, both Mayawati and Mr Yadav rescued the government during a tough vote on its retail reform, which allows supermarkets like Wal-Mart into India. In return for her party's votes, Mayawati had made it clear that the quota bill must be enacted as law.

''If You (India) Benefit From Our Suffering...": Ukraine Minister's Message