PM Modi, Xi Jinping Hit Reset, Military To Get The Message Too

PM Narendra Modi, Xi Jinping walked along the banks of East Lake and also took a boat ride together as they decided to step up their personal rapport

PM Narendra Modi, Xi Jinping walked along the banks of East Lake and also took a boat ride together

Wuhan, China: The India-China bilateral relationship cannot be held hostage to the differences that exist at various levels and dialogue at the highest levels between the political leadership of both sides can never end - this was the key message at the end of the two-day informal summit between President Xi Jinping and Prime Minister Narendra Modi in Wuhan.

Today, the two leaders walked along the banks of East Lake and also took a boat ride together as they decided to step up their personal rapport to add heft at the highest levels to try and fix a relationship that reached its lowest ebb last year during the 73-day military standoff in Doklam.

Significantly, the militaries of both countries will be instructed to lower tensions that exist along the contentious boundary between the two countries.  Prime Minister Modi and President Xi "issued strategic guidance to their respective militaries to strengthen communication in order to build trust and mutual understanding and enhance predictability and effectiveness in the management of border affairs," said Foreign Secretary Vijay Gokhale. 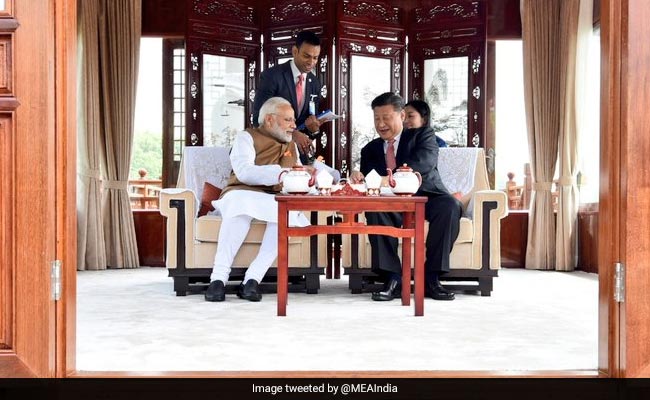 NDTV has learnt that both sides have agreed to set up a joint economic project in Afghanistan, an area of immense interest to not just New Delhi and Beijing, but also to Islamabad, China's biggest ally in Asia. Details of this project have not been shared so far.

There were six rounds of meetings between PM Modi and Mr Xi, both at the level of bilateral delegations and one-on-one meetings, where the two leaders were accompanied by only their interpreters. "Prime Minister Modi and President Xi reviewed developments in India-China relations from the strategic and long-term perspective" said the Foreign Secretary who added that both countries have "agreed to significantly enhance efforts to build on the convergences through the established mechanisms in order to create the broadest possible platform for the future relationship."

India continues to have concerns on Pakistan-backed terror, Beijing's decision to block New Delhi's entry into the Nuclear Suppliers Group and the China-Pakistan Economic corridor that flows through Pakistan-Occupied Kashmir but here in Wuhan, the two leaders decided that these outstanding concerns would be dealt with through existing mechanisms.  President Xi did, however, make it clear that terrorism at any level was unacceptable.  "Prime Minister Modi and President Xi recognized the common threat posed by terrorism, and reiterated their strong condemnation of and resolute opposition to terrorism in all its forms and manifestations" said Mr. Gokhale. "They committed themselves to cooperate on counter-terrorism."

Promoted
Listen to the latest songs, only on JioSaavn.com
A clear indication of the progress being made in these talks came in the local newspapers this morning.  Media organisations in China are either state-sponsored or following an official brief.  Several newspapers carried large photographs and articles on the summit, some placing news of the meetings ahead of the historic meeting between North Korea's Kim Jong Un and the South Korean President Moon Jae-in in the demilitarised zone (DMZ) between the two countries.

Prime Minister Modi next meets President Xi next month in China for the Shanghai Cooperation Organisation meeting though the next informal summit like this between Mr Modi and Mr Xi will take place in India next year.