"One should take feedback from multiple sources, analyse them and incorporate them," PM Modi said at the event. 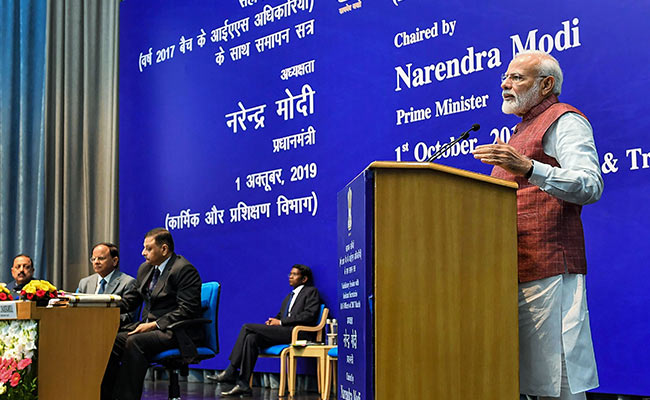 Prime Minister Narendra Modi on Tuesday addressed a group of over 150 newly-recruited IAS officers serving in various central government departments as assistant secretaries and encouraged them to be receptive towards new ideas, concepts and perspectives.

The 169 IAS officers of the 2017 batch made presentations to the Prime Minister on themes ranging from transforming aspirational districts to governance solutions for transparency and faster delivery.

Their tenure as assistant secretaries in various central government departments was extended from September 27 to October 1 by the Department of Personnel and Training (DoPT), Ministry of Personnel, Public Grievances and Pensions on August 30.

"One should take feedback from multiple sources, analyse them and incorporate them," PM Modi said at the event. PM Modi also asked the officers to strive for continuous learning and to foster curiosity.

Interacting with the officers, PM Modi said maintaining service orientation is paramount for a civil servant as it will bring out neutrality.

Emphasizing on the importance of public participation, he asked the young officers to encourage collective efforts for effective implementation of government schemes.

PM Modi asked the officers to imbibe the best experiences they had during the course of being assistant secretary. "Your success is important for the nation. Your success can transform the lives of many people," he said.