Independence Day 2019: Soon after finishing his speech, PM Narendra Modi walked towards the youngest section of the gathering before him at the Red Fort in Delhi

Prime Minister Narendra Modi today found himself mobbed by young schoolchildren at the historic Red Fort in Delhi, where he addressed the nation on its 73rd Independence Day.

Soon after finishing his speech, which lasted for nearly an hour-and-a-half, PM Modi walked towards the youngest section of the gathering before him, schoolchildren in the flag colours of white, saffron, green and navy blue.

The Prime Minister, who is always surrounded by his top security commandos, was momentarily surrounded by a sea of adoring children who tried to grasp his hand or touch his feet. The children had spent his entire speech sitting still, positioned in the form of the flag.

PM Modi, 68, tried to oblige them all before his security once again ring-fenced him from the crowd. 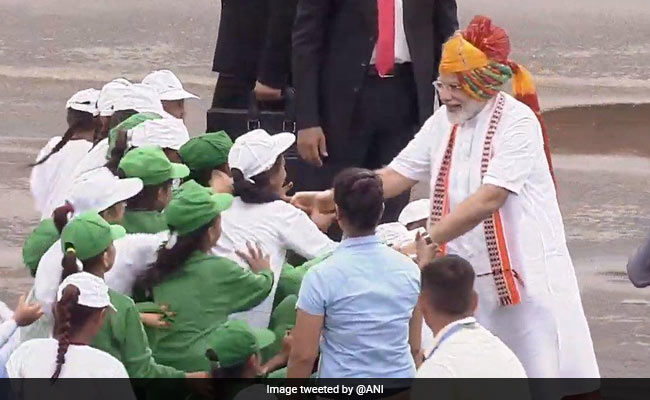 This was PM Modi's sixth Independence Day speech from the Red Fort, and his first after winning a huge mandate earlier this year to continue for a second term in power.

Speaking to reporters later, the children, asked how was it to meet the PM, said in unison: "Bahut achha (great)." One of them said she had asked PM Modi, "Aap Vaapas ayenge (will you come back)?" According to her, he replied: "Yes I will, beta."