Tulsi Gabbard was not present at the mega 'Howdy, Mody!' event in Houston earlier this week due to prior commitments related to her scheduled presidential campaigns. 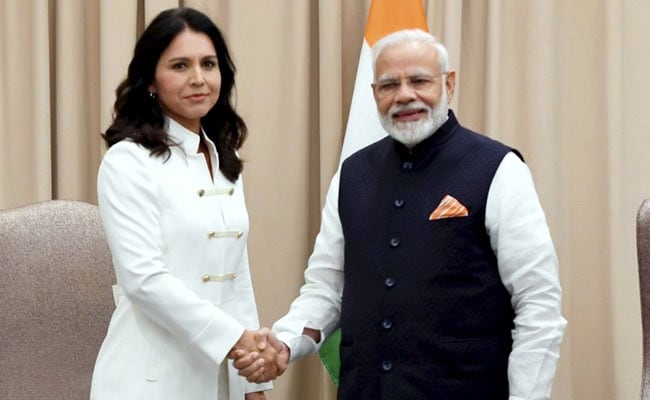 Ms Gabbard, a US Congresswoman and member of the Democratic Party, was not present at the mega 'Howdy, Mody!' event in Houston earlier this week due to prior commitments related to her scheduled presidential campaigns.

"Namaste! I would like to extend a warm welcome to Prime Minister Modi on his latest visit to the US and I am sorry that I will not be able to join there in person due to previously scheduled presidential campaign events. I am really glad to see so many Indian Americans from all across our country as well as colleagues from Congress coming together there," she had said in a video message.

Earlier in a tweet, Ms Gabbard had informed that while she will not be able to attend the event, she hoped to meet Prime Minister Modi during his US visit.

The Prime Minister on Friday delivered a speech at the UN General Assembly. PM Modi, in his address, spoke for around 17 minutes, where he touched upon a number of issues including climate change, development and terrorism.

He is scheduled to depart from New York to India later in the day after wrapping up his engagements, capping off his hectic week-long visit in the US.

UP Man Dies By Suicide After Vaccine Centre Brawl, Case Against 5 Cops