Emmanuel Macron explained the historic significance of the chateau to PM Narendra Modi and took him around the centuries-old building. 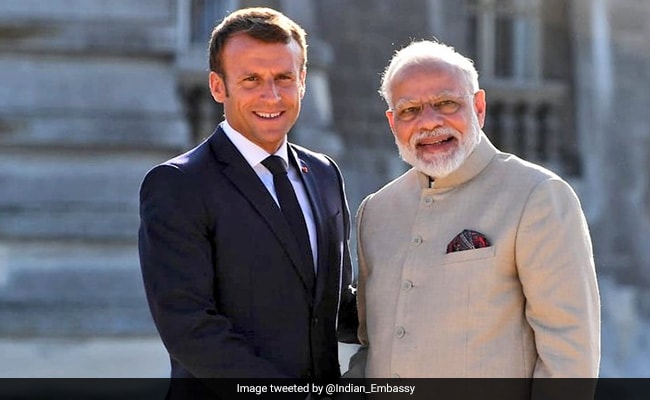 The two leaders held one-on-one interaction which was followed by the delegation-level talks.

Prime Minister Narendra Modi and French President Emmanuel Macron on Thursday held marathon one-on-one meeting during which they reviewed the entire gamut of the dynamic and multi-faceted relationship to further boost the strategic partnership.

Ahead of the meeting, PM Modi said the talks will add to the ground covered during previous interactions with the French leadership.

"Our strategic partnership is a very important pillar of our foreign policy," he added.

The one-on-one interaction was followed by the delegation-level talks.

In his departure statement, the prime minister had said his visit to France reflects the strong strategic partnership which the two countries deeply value and share.

"India and France have excellent bilateral ties, which are reinforced by a shared vision to cooperate for further enhancing peace and prosperity for our two countries and the world at large," the prime minister said.

He said the strong strategic and economic partnership is complemented by a shared perspective on major global concerns such as terrorism and climate change.

"I am confident that this visit will further promote our long-standing and valued friendship with France for mutual prosperity, peace and progress," PM Modi said.

Ahead of the meeting at Chateau de Chantilly, one of the finest jewels of French cultural heritage, located about 50 kms north of Paris, Macron explained the historic significance of the chateau to Modi and took him around the centuries-old building.

Earlier, Prime Minister Modi was accorded a red carpet welcome at the airport where he was received by Minister for Europe and Foreign Affairs Jean-Yves Le Drian.

"India and France enjoy extremely friendly ties and have been working together bilaterally and multilaterally for years," PM Modi tweeted soon after his arrival.

During his two-day visit, PM Modi will also meet his French counterpart Edouard Philippe and interact with the Indian community.

He will dedicate a memorial to the Indian victims of the two Air India crashes in France in the 1950s and 1960s.