"It is no wonder that while the entire nation supports our armed forces, they suspect the armed forces," PM Narendra Modi said in the first of his meetings in Tamil Nadu 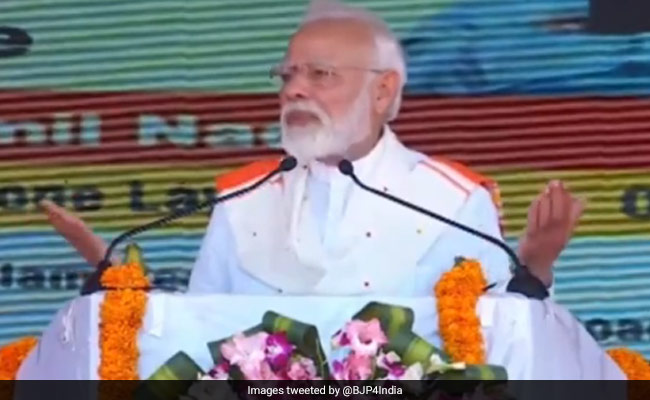 Prime Minister Narendra Modi today said India is "no more helpless" against terror and would pay back terrorists "with interest" as he referred to India's air strikes targeting a terror camp in Pakistan. He also targeted opposition parties and accused them of "helping Pakistan and harming India" with their statements.

"It is no wonder that while the entire nation supports our armed forces, they suspect the armed forces," he said in the first of his meetings in Tamil Nadu as he campaigns for the national election due by May.

"They are the same people whose statements are being happily quoted in Parliament of Pakistan and in the radio of Pakistan. I want to ask them - do you support our armed forces or suspect them," he questioned.

Referring to India's air strikes on a terror camp in Pakistan on Tuesday, PM Modi said: "India will no longer be helpless in the face of terror."

As he justified India's move to send fighter pilots to Pakistan to target a training camp of the terror group Jaish-e-Mohammed, PM Modi also took a swipe at the Congress.

"There was a time when news reports would read - air force wanted to do surgical strike but the UPA blocked it but today we are in an era where the news reads that armed forces have full freedom to do what they want. This is an India which will return the damage done by the terrorist with interest. The events of the past few days have demonstrated the strength of our armed forces. It has also brought our nation closer," said PM Modi.

The Prime Minister also praised Indian Air Force (IAF) pilot Abhinandan Varthaman, who is being admired for his courage and fortitude after being captured by Pakistan on Wednesday. "The entire country is proud that the brave Wing Commander Abhinandan is from Tamil Nadu."

In response, Congress chief Rahul Gandhi said: "Our prime minister cannot even leave his public relations or PR for even 5 minutes. This is the difference."

PM Modi's comments come two days after 21 opposition parties met and put out a statement accusing the ruling BJP of "blatant politicisation of the sacrifices of armed forces."