Vivek Lall was last year appointed as the Chief Executive of General Atomics Global Corporation at its headquarters in San Diego. 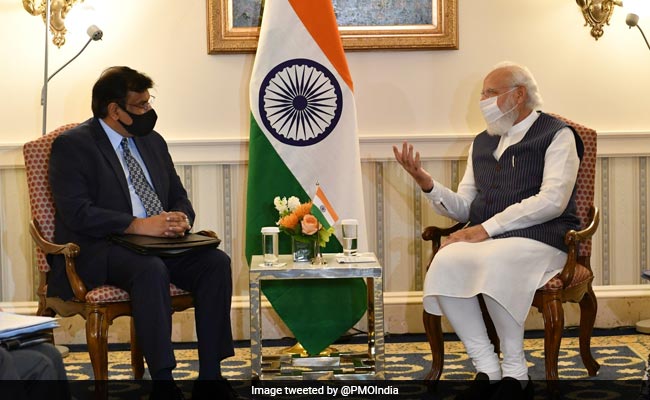 Mr Lall, a prominent Indian-American aerospace and defence expert who played key roles in some of the major defence deals between India and the US, was last year appointed as the Chief Executive of General Atomics Global Corporation at its headquarters in San Diego, California.

Drone is an upcoming sector in India and it is of particular interest to the youth, PM Modi said.

"Interacted with Mr Vivek Lall of GeneralAtomics Global Corporation and spoke about how India is ushering a paradigm shift in drones policy, seen in our PLI scheme and reform measures," he tweeted.

Mr Lall appreciated the recent policy changes to accelerate defence and emerging technology manufacturing and augment capacity building in India in his talks with the prime minister, the Ministry of External Affairs (MEA) said in a statement.

"They spoke about strengthening the defence technology sector in India," it said.

"Discussing a subject of the future, which has captured the imagination of the present. Mr. Vivek Lall of @GeneralAtomics Global Corporation interacted with PM @narendramodi. They discussed India''s strides in drone technology, including the path-breaking reforms and PLI (Production-Linked Incentive) scheme," the Office of Prime Minister Modi said on Twitter.

Mr Lall said India's policies and reforms in the field of drones are laudable.

"India is an attractive destination for manufacturing drones. He also said that a dedicated drone hub can be created in India to support the entire ecosystem of drones," the Indian-American Chief Executive of General Atomics said.

General Atomics (GA) is one of the world's leading privately held nuclear and defence companies.